Another cupcake testing, another success! Here is the latest cupcake creation we tested for Kelly Peloza‘s upcoming dessert cookbook. This cupcake was moist, delicious, and buttery. It had a nice blend of lemon with hints of whiskey. For whiskey aficionados more could have been added, but for me the current level was fine. It was a unique blend of flavors that I’ve never had before but was glad I tried. We’d definitely make these again, especially for a special occasion or for entertaining friends.

Overall, we’d rate these 4 1/2 carrots out of 5 on the veganlicious scale.

Finding alternatives for a meat-free St. Patrick’s Day wasn’t difficult. I was never a corned beef fan in my pre-vegan days anyway, so finding a substitute for salty beef was not necessary. I decided to stick with mostly whole foods and forgo any faux meat products for this year’s feast. While listening to Flogging Molly in the background, I concocted our Irish feast.

We started off with some freshly baked whole wheat Irish Soda Bread (minus the raisins) from Happy Herbivore. The bread was dense, moist, and chewy. It was great with some vegan butter and dipped into our next soup course.

Next we had Irish Carrot Soup from this Epicurious recipe (minus the whipping cream). The soup was described by others as tasty and “carrot-y.” I found it a tad bitter for my taste, which could have been attributed to either the lemon juice or cloves included in the ingredient mix. I would make it again in the future if I omitted one or both of those ingredients.

The soup was followed by a nice green salad and our main course. I had previously made the kale salad numerous other times and blogged about it. I also have made the Chickpea Shepherd’s Pie before, but it came out even better this time because I used a different mixture of veggies from my first attempt. I used a mixed bag of frozen corn, peas, and carrots. I also added some nutritional yeast in the chickpea mixture as the original creator of the recipe recommended. Delish! The sour gherkins and castelvetrano olives were a nice salty side dish to the meal as well. Okay, so the olives were actually Sicilian (not Irish), but they were green and addicting.

Beverage wise, we were delighted by some spirits that our friend Brent brought over. The men enjoyed Guinness Extra Stout, which according to Barnivore, is the only vegan Guinness beverage. Normally Guinness is made with a fining process using isinglass (from the swimbladders of fish).

After dinner, we had a nightcap of a veganized Bailey’s Irish Cream (consisting of a coconut milk base) that was absolutely amazing. It was creamy, smooth, and sweet with just the right amount of Jameson.

Since it was a warm evening, I decided to make veganized Shamrock Shakes for dessert. I added a healthier version of Oreos to the mix for a cookies and cream appeal.

Put all of the ingredients (minus the mint and straws!) into a blender and puree until desired consistency is reached. Add more ice cream or milk depending on how thin or thick you want it. Garnish with mint and stick a straw in the glass for easier drinking.

This was the perfect blend of mint, vanilla, and cookie-goodness! The cilantro was a nice addition and wasn’t too strong or overbearing (for those who aren’t cilantro fans).

To top of our St. Patty’s Day vegan feast, we watched the campy, cult horror film Leprechaun, featuring a young Jennifer Aniston. It was hilarious and silly and the perfect ending for a great dinner with friends. It turns out that Jennifer Aniston’s character is vegetarian in the movie, thus prepping me up for another future edition of Vegetarian Protaganists in Horror Movies. Erin go Braugh!

Overall, I’d give this meal a 4 1/2 out of 5 carrots on the veganlicious scale!

One thing I’ve missed since going vegan are Reese’s Peanut Butter Cups. They are reminiscent of my adventures in trick-or-treating on Halloween and were always a joy to pop into my mouth, savoring each bite.

Luckily, I recently discovered Jennifer and Nathan Winograd‘s new book, All-American Vegan. Not only does the book have some amazing recipes of all the comfort foods many Americans enjoy (veganized!), but it covers issues such as shelter animals, the art of vegan substitution, important moments in vegan history, and humorous bits such as “Things Vegans Should NEVER Say When Discussing Veganism with Non-Vegans.” I was also impressed with Nathan Winograd’s history in the no-kill shelter movement, particularly starting it at my local SPCA shelter years ago. It is refreshing to see an “animal lover” who really does practice what he preaches in all aspects of his life (and not just with companion animals).

This recipe is so simple and amazingly delicious that it is enough just to buy the book for the peanut butter cup recipe alone! I was so excited after I first made them, that I made several batches to give to friends and family as gifts. The filling had the right consistency and blend of savory/salt and sweet flavor. My omni husband even said they were better than Reese’s because they had more peanut butter.

See the various stages of my candy-making below. I used Enjoy Life! Mini Chips (melted) for the chocolate coating. They are dairy-free, soy-free, gluten-free and my favorite chocolate chip to cook with. A new era has begun for me and vegan desserts. Oh my! 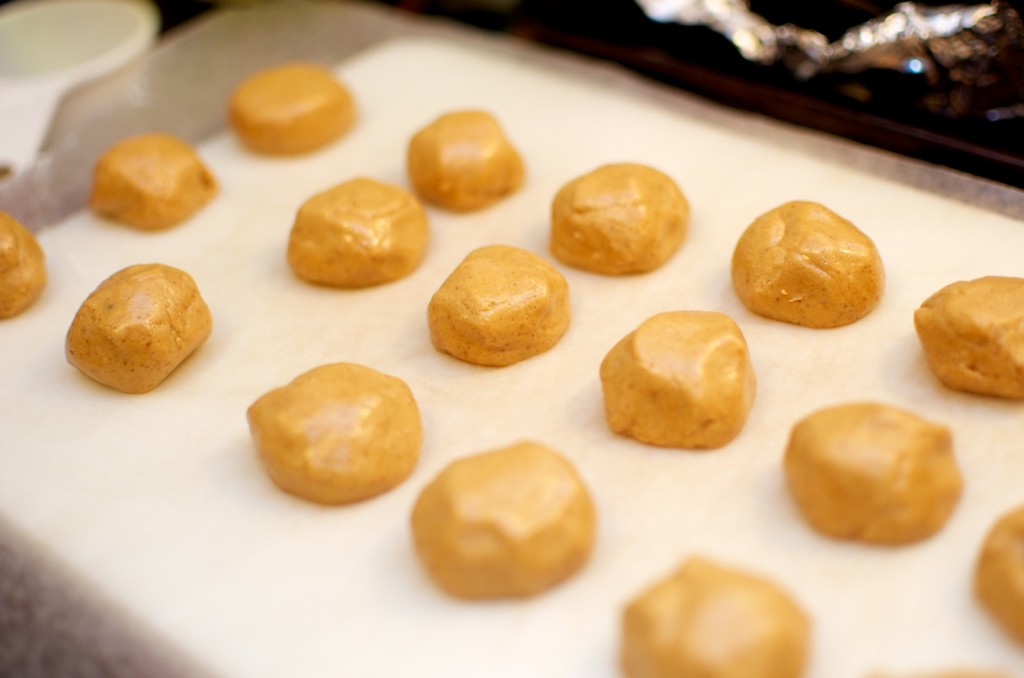 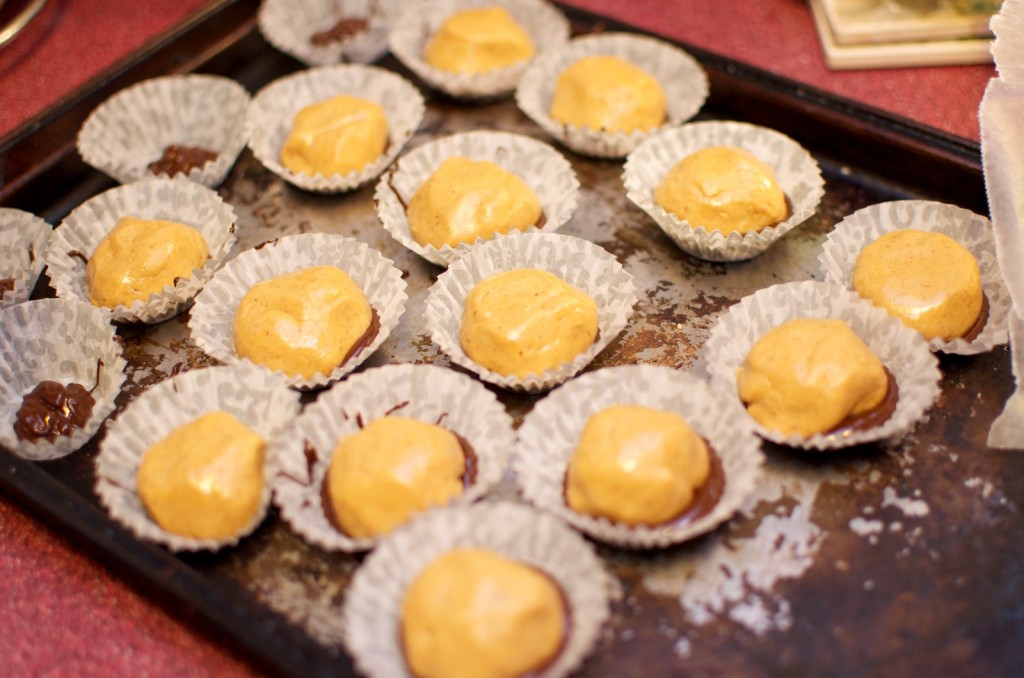 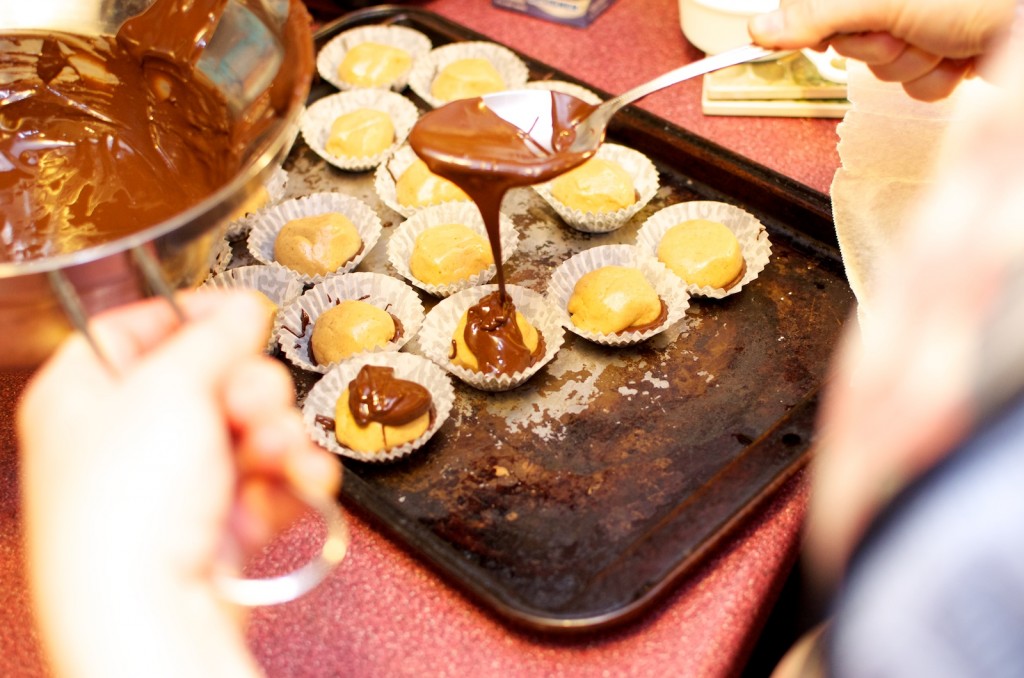 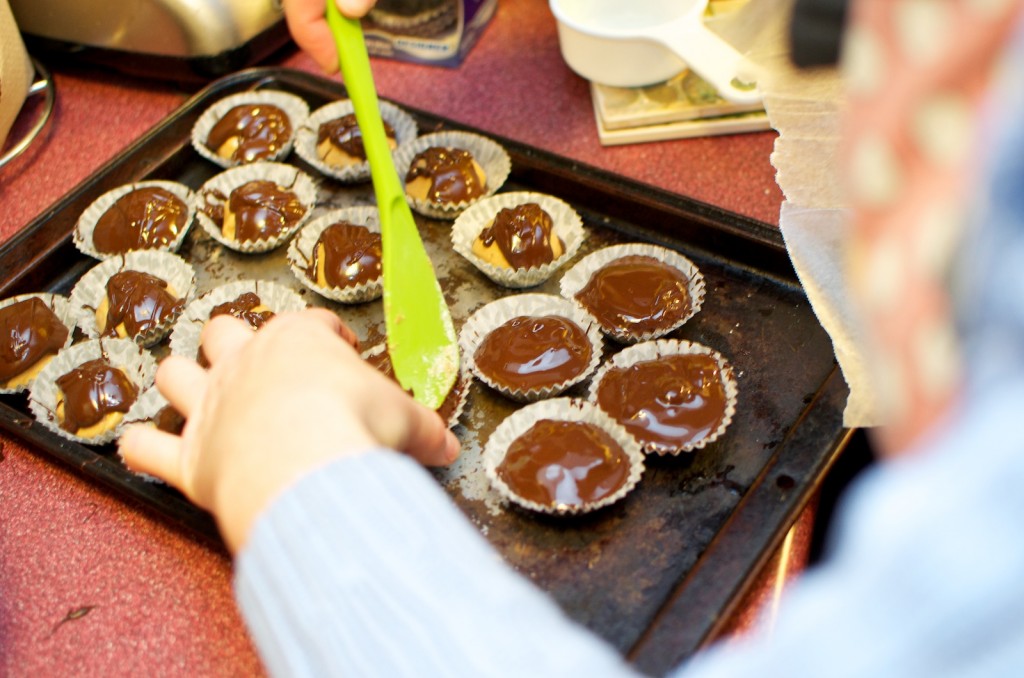 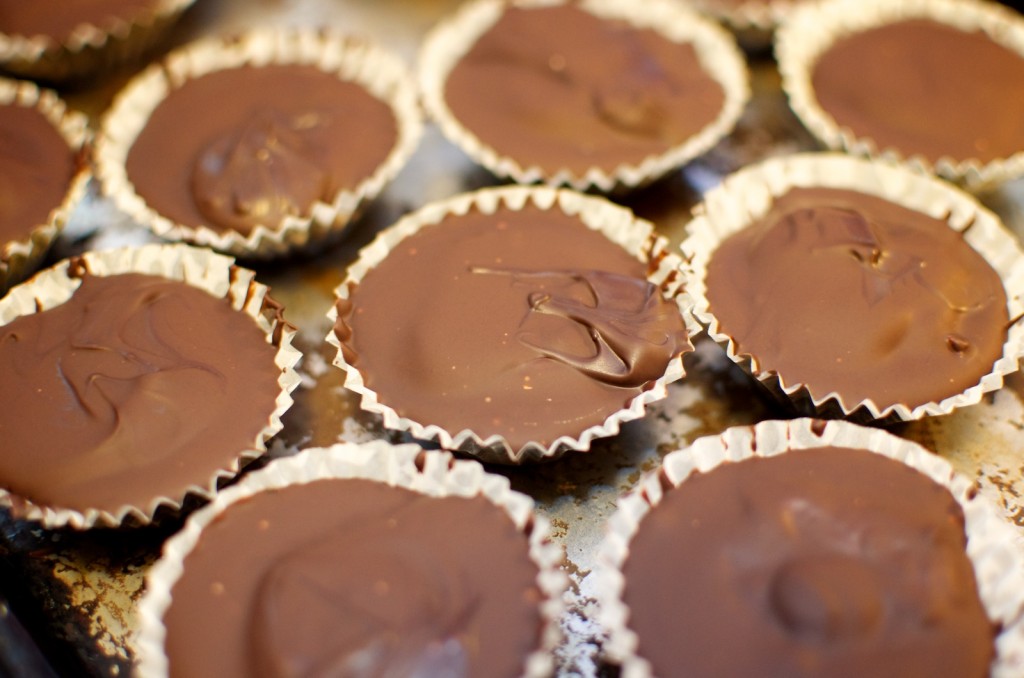 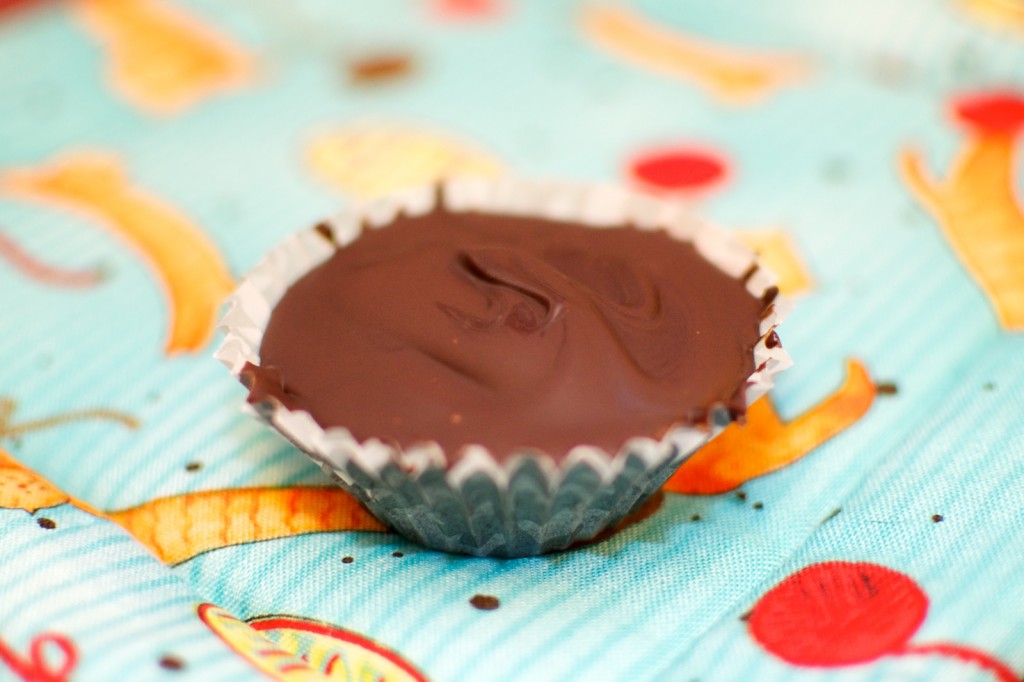 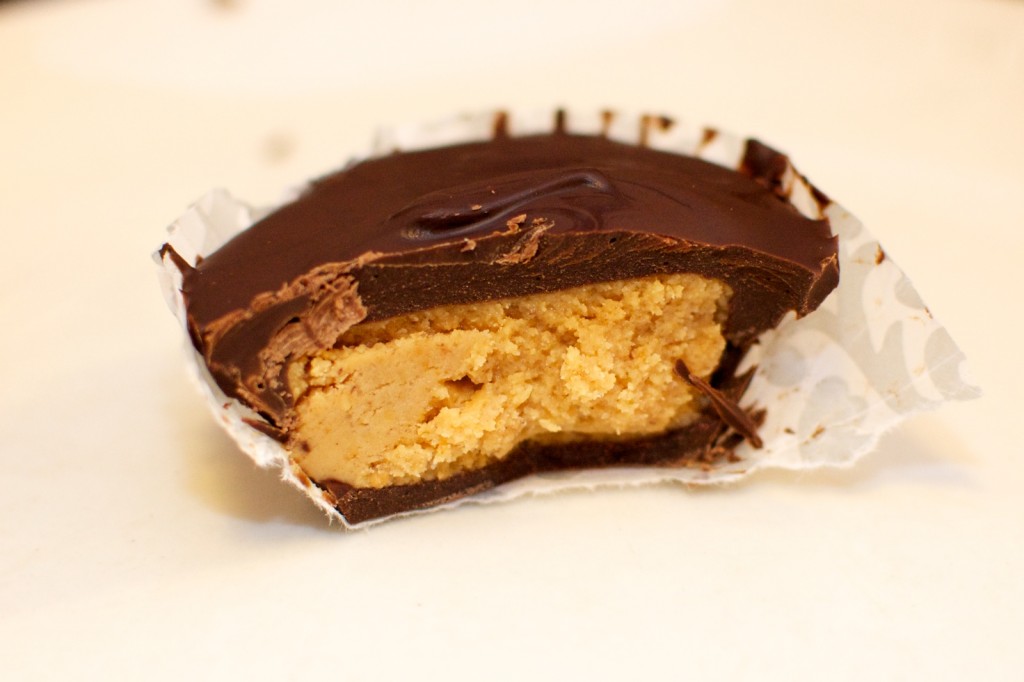 These peanut butter cups definitely earn a strong 5 out of 5 carrots on the veganlicious scale!

This post is a little late, but I wanted to get it out there so people know what vegans (0r anyone else for that matter) may choose to eat instead of participating in the yearly turkey massacre on Thanksgiving. Below are the dishes I shared with some awesome vegan friends and my omni husband this year.

Many of my dishes were from Nava Atlas’ new book, Vegan Holiday Kitchen. I love it! It provides many festive recipes for Thanksgiving, Christmas and the holiday season, Jewish holidays (Passover, Rosh Hashanah, and Hanukkah), Easter, Independence Day and summer entertaining, brunches, appetizers, and potluck dishes.

We started off the feast with a mixed baby greens salad with pears and glazed pecans. The pecans were still warm when I served the salad, which was very inviting and delightful for myself and my guests. It was the right blend of savory and sweet.

The main entree consisted of quinoa and lentil-stuffed golden acorn squashes. I used red quinoa in this recipe and topped them off with parsley. Red quinoa isn’t only colorful, but tastes delicious and along with the green lentils in this dish, made for a very hearty meal. Quinoa and lentils are protein-packed and really give this fall meal the backbones that many believe might be lacking in a vegan Thanksgiving feast. No worries here: just one half of a stuffed squash is enough to fill up most guests.

The squash were accompanied by red wine-roasted brussels sprouts (from Vegan Holiday Kitchen) and this candied sweet potatoes dish. I added some Dandies marshmallows to the sweet potato dish when I baked them which was pure perfection. The brussels sprouts were tasty but could have been cooked at little longer or seemed to be missing something.

No Thanksgiving meal is complete without delectable desserts. I used my favorite pumpkin pie recipe for the pie we enjoyed this year. I could eat this pie for breakfast, lunch, and dinner.

I used a coconut-based cream for the topping that I made from a previous recipe I was testing out for Kelly Peloza’s new cookbook coming out in the future. It made a lovely addition to the pie.

It helps to have awesome vegan chefs as friends who love to bring you their creations. My friend Anastasia St. John delighted us with a family recipe she veganized. It was a frozen cranberry pie made blended with pineapples, topped with a raspberry glaze, on a cashew cream and walnut crust. Simply divine!

Another talented vegan chef and friend, Stephanie Langer brought over some amazing cookies. The cookies consisted of cookies within a cookie (hence the clever name, “Cookie Cookies”). The cookies contained broken Oreos (or in this case, Newman O’s Original) inside a more traditional sugar cookie-type recipe. The recipe can be found in The Complete Guide to Vegan Food Substitutions on page 92 by Celine Steen and Joni Marie Newman. Amazing!

I naturally could not help myself and had to sample all three desserts we had on hand that evening. It was a happy plate of goodness.

Overall, I give this decadent meal a 4 1/2 out of 5 carrots on the veganlicious scale.

I have been meaning to make these cupcakes for a long time and finally got the chance to recently. This is another fabulous creation from Kelly Peloza, who is dedicated to coming up with delicious drink-themed desserts in her latest cookbook.

These cupcakes are rich with coconut-flavored goodness! They were moist with a delicious coconut and cola buttercream frosting. Even my omni friends were raving over these. Once Kelly’s new cookbook comes out, you have to check it out, even if just for this recipe alone. Yummy!

These cupcakes get a solid 5 out of 5 carrots on the veganlicious scale! No doubt.