Whenever I run across a raw restaurant in my travels, I feel compelled to try it. Raw food often times is prepared very creatively in gourmet restaurants. Upon reading about Pousse-Pousse, a small vegetarian restaurant and juice bar with mostly raw and vegan selections, I was eager to try it. We took 4 connections on the Paris Metro to get there and it was well worth the trip. This by far, was my favorite meal during our trip to France. 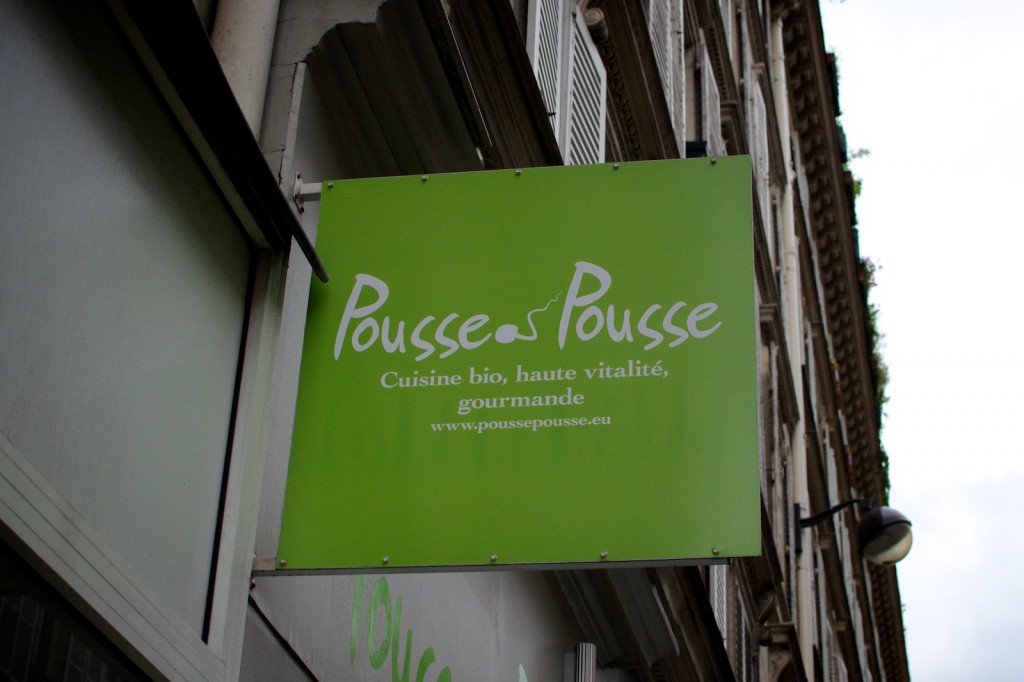 I started off with a fresh pressed juice made with beets, carrots, and ginger. It was divine and perfectly blended.

Next up was a delicious, spicy gazpacho which definitely had some cayenne heat.

My main entree consisted of an eggplant tart (baba ganoush), chutney (mango, cucumbers, pumpkin, red pepper, parsley and pumpkin seeds), salad with a lemon tamari dressing, and a raw caviar made with sprouts (not surprising considering the restaurant’s name “Pousse-Pousse” means “sprout-sprout” in French). The eggplant tart was made with eggplant, tahini, and garlic and was served warm. It was perfect to spread on the flax crackers or to eat alone. The chutney was an explosion of fresh fruits and vegetables. I was so impressed with all of the combinations that I asked the server if someone could write down (in English) what the ingredients were. The server sent the chef out who was a younger American woman who had lived in Syracuse, NY for many years. What a small world!

My husband ordered the polenta cake which was covered in a tomato curry chutney and also included the same side of mango-pumpkin chutney, raw caviar, and salad that my entree had. He noted his polenta cake was flavorful and pleasantly dense.

For dessert, I ordered the apricot crumble. It was a little tart for my liking, but was an interesting mix of crispiness and soft fruit.

All of the food was beautifully plated and as strange as it is to say, it felt like someone who really loved me created this meal. Overall, we were very pleased with our meal and would happily return if back in Paris.

We’d rate this meal a 4 1/2 out of 5 carrots on the veganlicious scale. 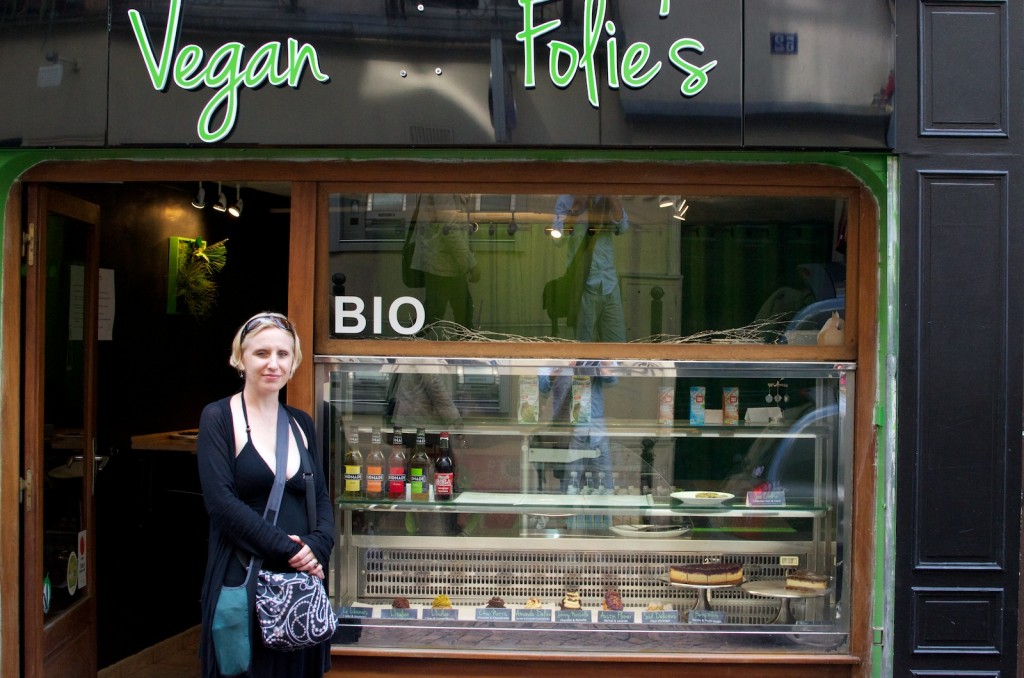 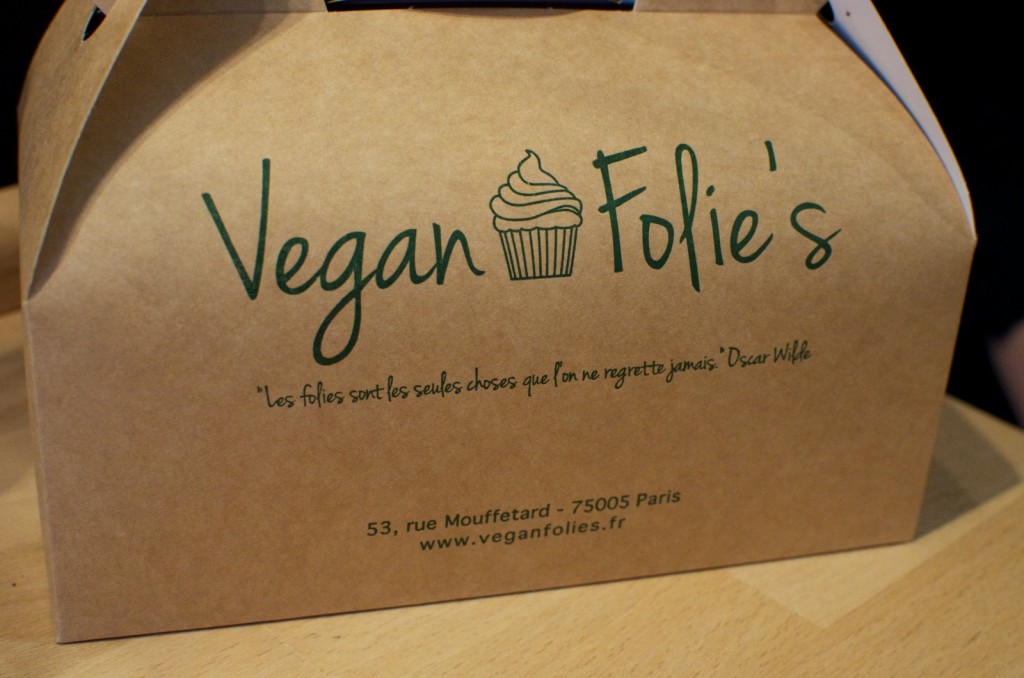 My husband is a bit of a falafel connoisseur and I read some great reviews of L’As du Fallafel on many sites. They are so famous, they even have a wikipedia page. We decided to get counter service, which was a littler cheaper than eating inside. The line moved quickly and efficiently. A waiter took our order while we waited in line and gave it to the cooks who prepared our sandwiches with amazing speed before our very eyes.

We got the signature vegetarian falafel sandwiches which were filled to the brim with falafel, eggplant, hummus, hot sauce, and other fillings that I cannot name. The falafel was fried to perfection and all the flavors blended well together. The “hot” sauce was not very hot at all, but otherwise it was one damn good sandwich.

I also have to mention that our time in Paris (and in France in general) was filled with mostly good service and friendly people. This is of course a contrast to what we were expecting with the stereotypes that the French hate Americans and would be rude to us. A time of kindness that sticks out was when I was asked something about my order in complete French here at L’As du Fallafel. I don’t speak or understand any French, so I looked at the cook with a blank stare and said I didn’t speak French. A woman standing behind me in line was kind enough to translate for me in English and indicated he was asking what I wanted to drink. I was very surprised and appreciative.

We ate our falafel sandwiches around the corner from the restaurant at a little park area on Rue des Blancs-Manteaux as recommended from molasses jane on the PPK “Paris is not vegan hell! The official France thread.” Actually, much of what molasses jane posted on this thread was extremely helpful in choosing veg-friendly places in France. I recommend checking it out. Thanks molasses jane!

We thoroughly enjoyed the sandwiches and my only regret is forgetting to order the homemade lemonade that molasses jane recommended.

Overall, we rate our meal as 4 1/2 carrots out of 5 on the veganlicious scale. 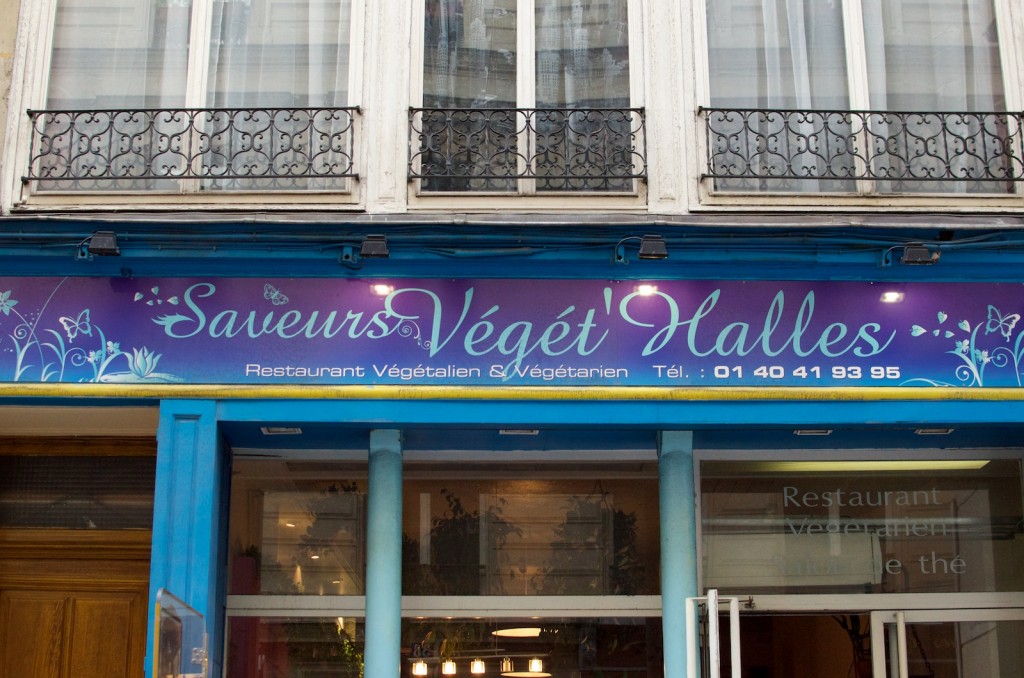 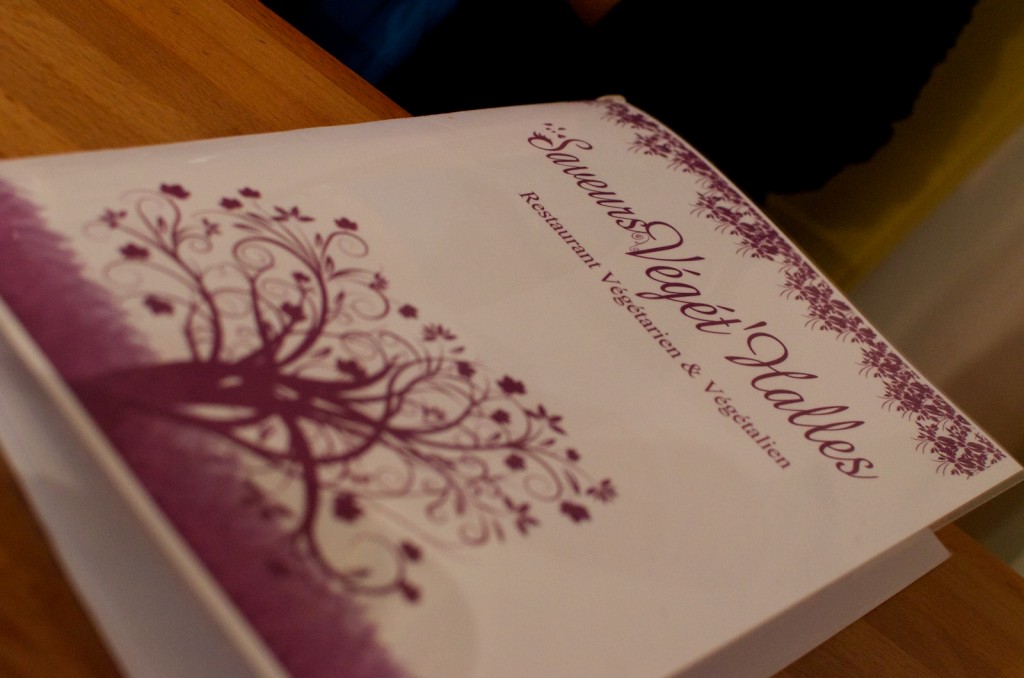 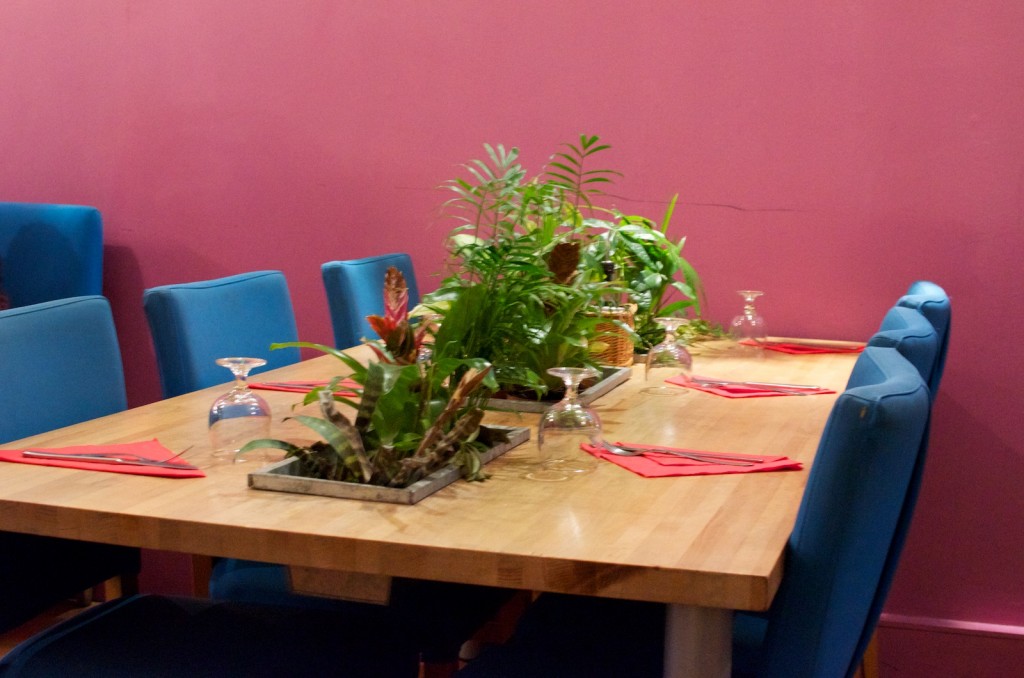 We had the pleasure of spending our two year wedding anniversary in Paris while on a family vacation. We went off on our own to explore the city and I was determined to eat at vegetarian or vegan establishments on this day. Luckily for me, I was able to find a plethora of reviews and options on a French website devoted to veg-eating in Paris called V-G-Zone. It is really THE website for anyone seeking vegetarian, vegan, or just veg-friendly restaurants in the city of lights. Highly recommended!

I read some wonderful HappyCow reviews of the all-vegan Gentle Gourmet Cafe online, so we decided to try them for lunch on our anniversary. We were impressed the minute we walked in the door. The restaurant had an upscale, clean decor. Everything on the menu seemed appetizing. We were lucky enough to sit next to an Australian family on vacation together, so I was able to ask them what they thought of their meals and got recommendations on what we should try. 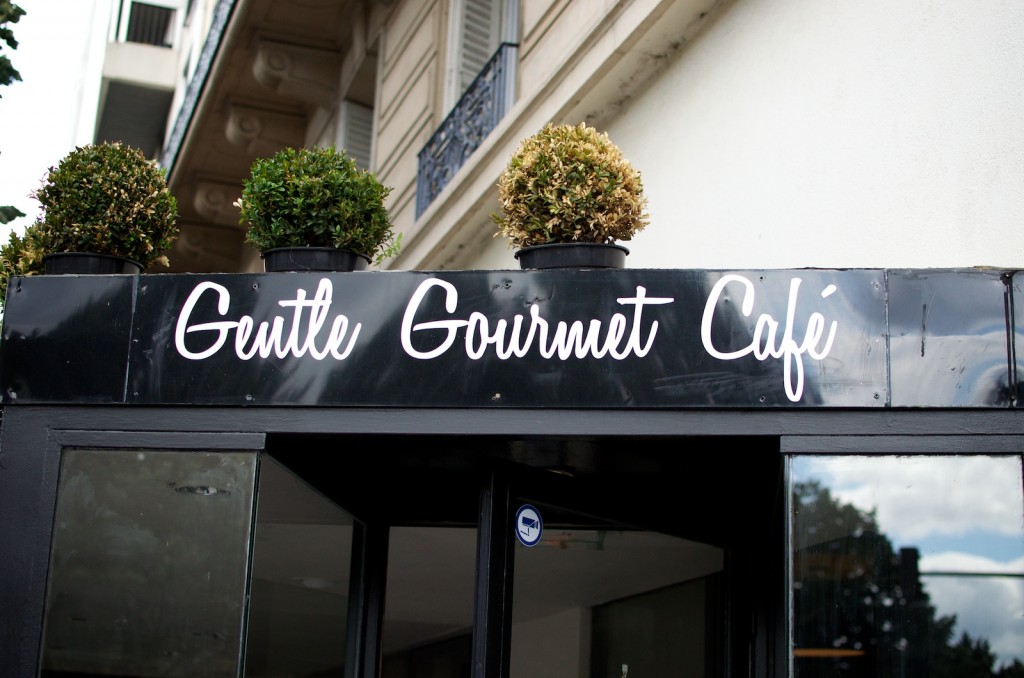 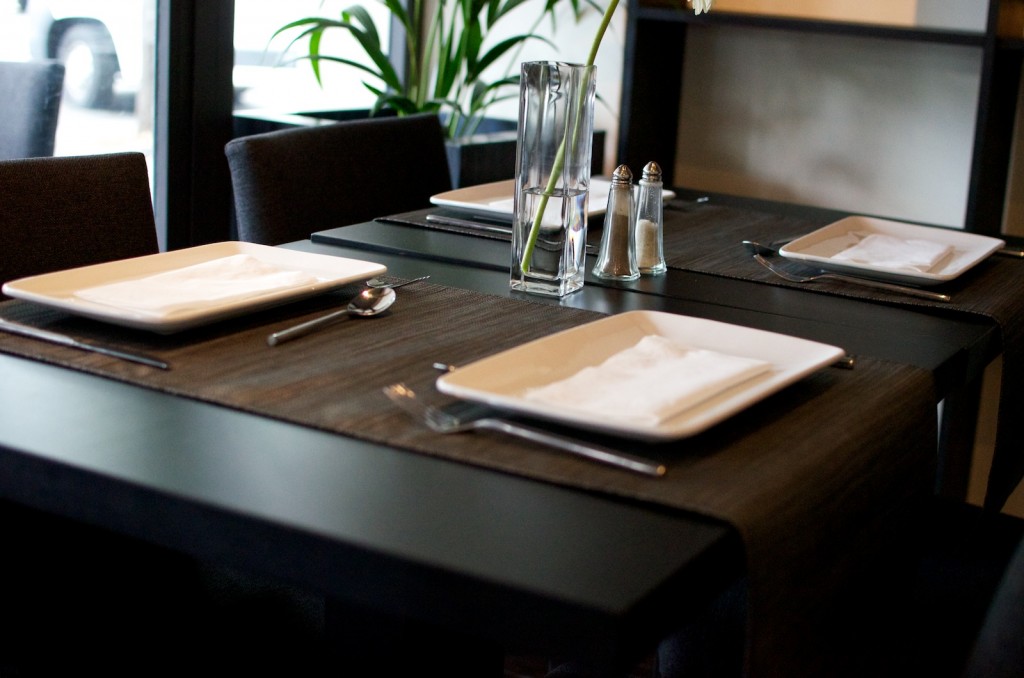 I had an excellent lentil burger with caramelized onions, vegan cheese, and mushrooms. I’m normally not a fan of mushrooms, but the combinations of the onions and cheese made this a party in my mouth. The meal came with a tasty side salad and fries as well.

We both decided to try their crepes, which looked amazing plated and we could get virtually any fruit available to fill them. I had a delicious banana and chocolate filled crepe. The hubs got a mixed berry crepe that had a lot of whipped cream inside and a fruit sauce on the outside. There was no fruit inside his crepe however.  The crepes were thicker than what we were used to and had too much whipped cream inside for our liking. But they both were very tasty and filling nonetheless.

Beverage wise, we ordered an organic bottled lemonade that was sweetened with agave and a white grape juice, both of which were very delicious.

Overall, we really enjoyed the meal we had here and we return on any future visits to Paris.
We give rate this meal a 3 1/2 carrots out of 5 on the veganlicious scale.