One of our all-time favorite restaurants is Vedge, the premier upscale, vegan experience in Philadelphia, PA. It was recently rated as the third best restaurant by Philadelphia Magazine, in competition with all of the non-vegan establishments. Chef Rich Landau has won many accolades, from winning the best chef on Chopped to being named Best Chef in Philadelphia – this man and his wife, Kate Jacoby, are a force to be reckoned with.

On the day that my pre-ordered Vedge cookbook arrived, it felt like Christmas had come early. The book’s sub-title is “100 plates large and small that redefine vegetable cooking” and that it does. I was surprised at just how simple many of the recipes were for such a fancy dining. I found myself reading tips like how to cook greens (blanch them first, then cold water bath before sautéing) like I was studying for the GRE. This takes vegan cooking up so many notches. Vedge is what I’d like so many other vegan restaurants to be. Let’s get out of the 70s with our stir fry and brown rice and really get creative! Vedge will not disappoint.

The meal I made tonight was inspired by Vedge. I used the recipe from the book for the Swiss Chard with Pickled Golden Raisins and Pistachios, substituting currants for the raisins (as I didn’t have any raisins and I’m not a big fan of them anyway).

To accompany them, I made black beluga lentils that I had in the cabinet as my peaceful protein. It’s super simple to cook black lentils if you follow the steps laid out here on the Livestrong page.

Lastly, I prepared roasted cauliflower as I had two small heads of it in my crisper from my CSA share. Here’s the super simple recipe for it:

Preheat oven to 400 degrees. Toss cauliflower with olive oil, salt, and pepper in a large bowl. Spread out evenly on a lined cookie sheet (use parchment paper or a silicon Slipmat). Cook for 20 minutes making sure to turn over with a spatula afterwards. Cook for another 15-20 minutes until edges are browned and cauliflower has softened. Remove from oven and toss with lemon juice. Serve immediately.

This meal was simple, elegant, and divine. Thanks for the inspiration Kate and Rich! 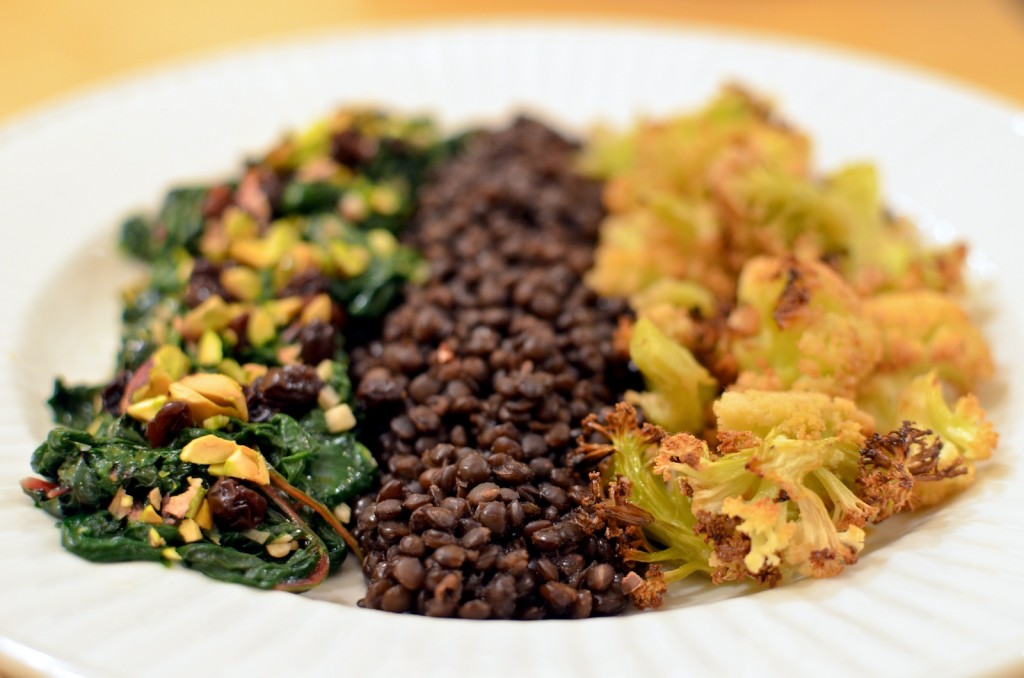 Overall, we’d rate this meal 4 out of 5 carrots on the veganlicious scale! 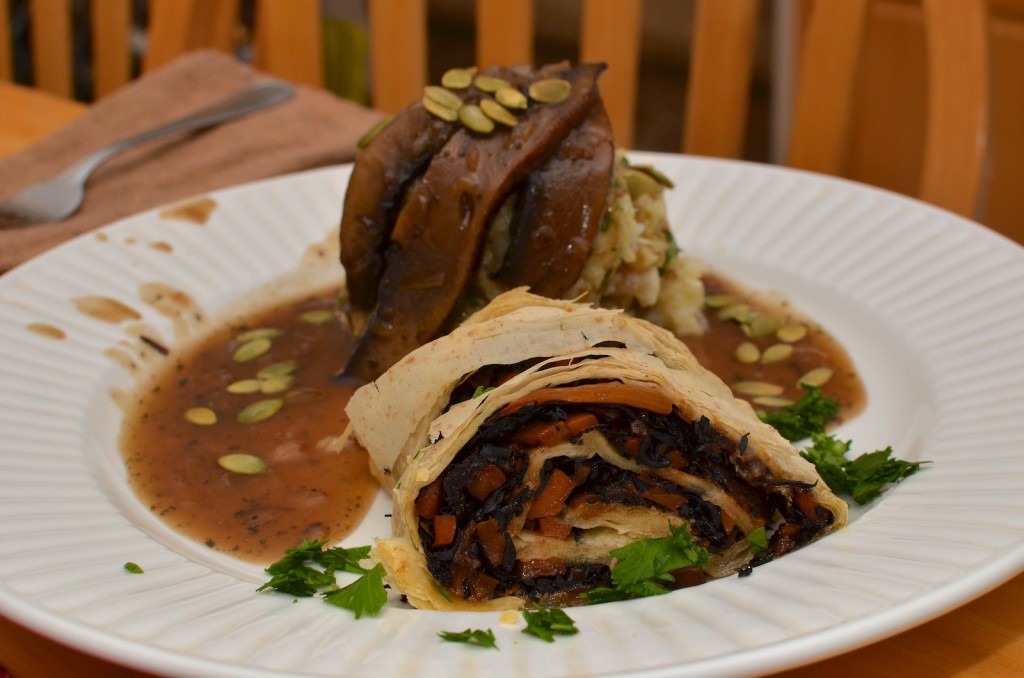 Using fresh vegetables from our CSA (broccoli, cauliflower, & more greens), my husband made a tasty stir-fry recently. Using this recipe as his inspiration, he omitted the sweetener, broth, and corn starch. He also used different veggies (see list above). The recipe can be easily adapted depending on taste and vegetable preferences. It was a welcome change to my normal Americana dinner fare. He also took this awesome photo to boot (and has been taking a lot of the more recent pictures in my blog posts).

Overall, we’d rate this dish a 3 out of 5 carrots on the veganlicious scale!

One of my all-time favorite vegan upscale restaurants was Horizons in Philadelphia. It is closed for business, as the owners Rich Landau and Kate Jacoby are opening a new restaurant called Vedge (to be open in the coming weeks hopefully). A great recipe that I made from their Horizons: New Vegan Cuisine cookbook is the delicately delicious White Bean and Cauliflower Soup with Truffle Oil. The blend of cauliflower and white bean is creamy and exquisite. This makes a nice meal with a simple salad and crusty bread or as a starter to a gourmet multi-course dinner.

This dish earns a solid 4 out of 5 carrots on the veganlicious scale!