This post is long overdue but I’ve been so overwhelmed with life, work, travel, and sorrow to put to words the loss of my dearly beloved tuxedo cat, Neo who we said good-bye in the beginning of May.

Neo was our first cat together. In 2008, when we lived in NJ, I responded to an email from an animal activist and friend from Philadelphia who was looking for a home for him. Neo did the right thing by following an AR activist home in his West Philly neighborhood! 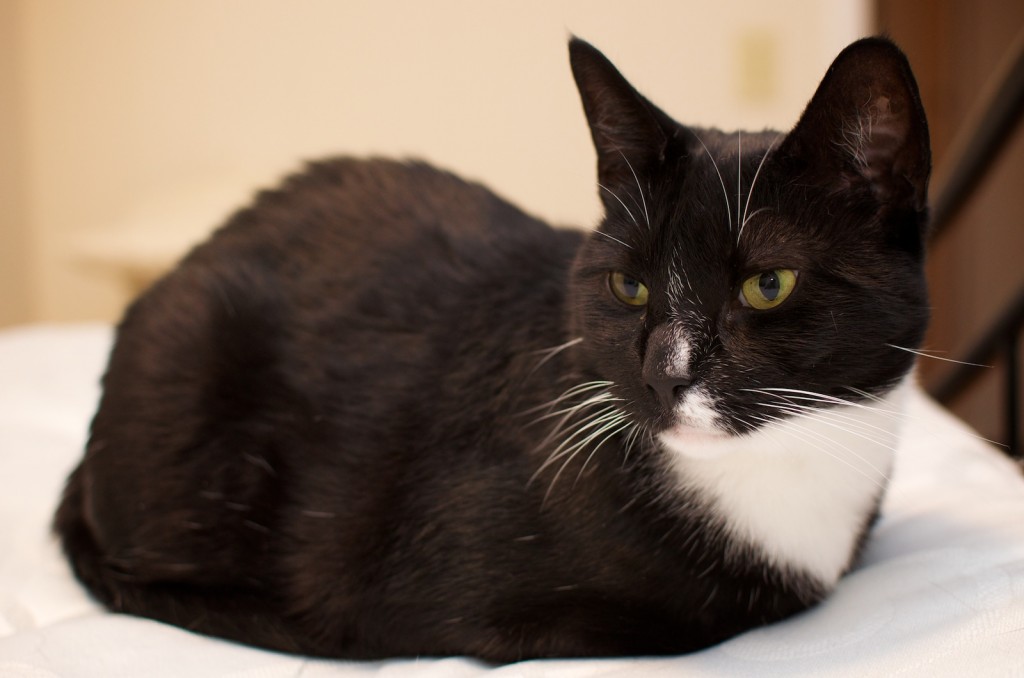 Neo tested positive for feline leukemia virus (FeLV+) and was given only 6 months to 2 years to live. We took him in thinking that he wouldn’t have very long but we’d give him a good quality of life in his remaining time. Also, many vets and animal shelters euthanize cats upon diagnosis as it is considered “untreatable” and it can be passed onto other cats through sharing water/food dishes, grooming, and exchanging bodily fluids. It cannot be passed onto humans or dogs though. I figured anyone who would have the heart to take in a cat like Neo probably has other cats that don’t have FeLV and cannot take on the risk of exposing them to this virus. 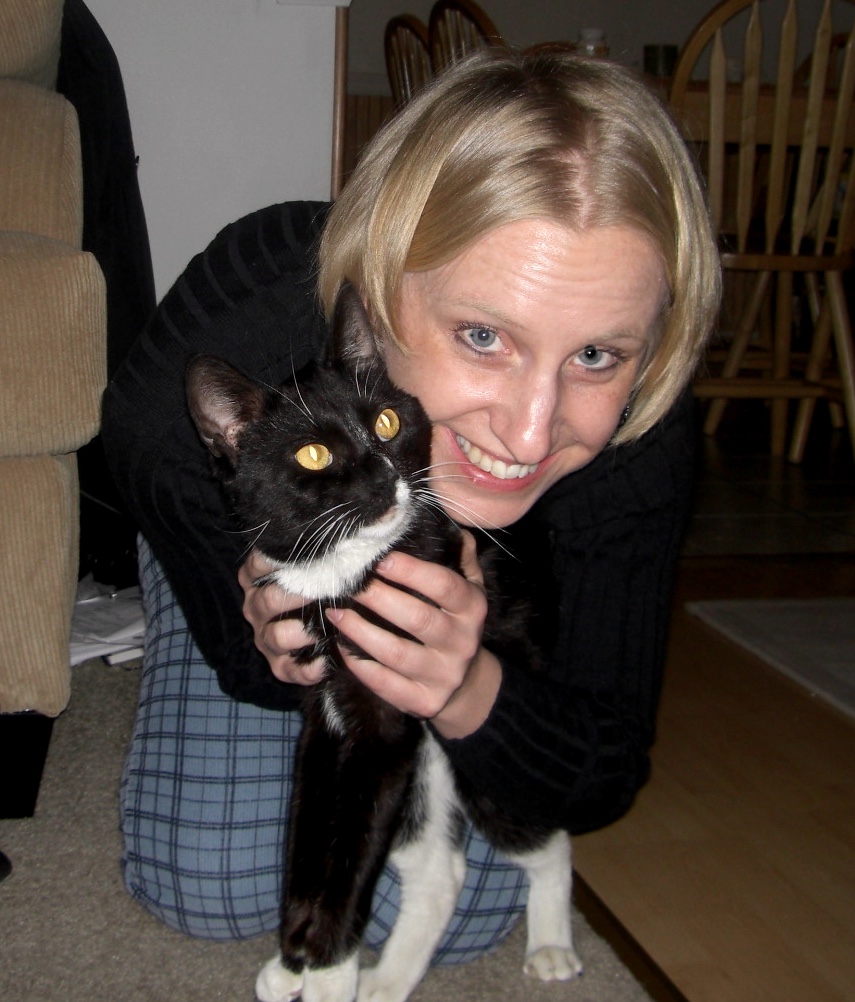 Neo was originally named “Nico” and being fans of The Matrix and realizing his special meaning to us as “the one” – we re-named him Neo. To this day, he remains the only cat we have re-named.

We were like scared, first-time parents when we picked Neo up. He was malodorous from his time on the streets and reeked badly when we brought him home. We did the rare thing for those with cats and bathed him together in our sink to get rid of the stench. From that day forward, he was very clean and had no problems with grooming until his final days. 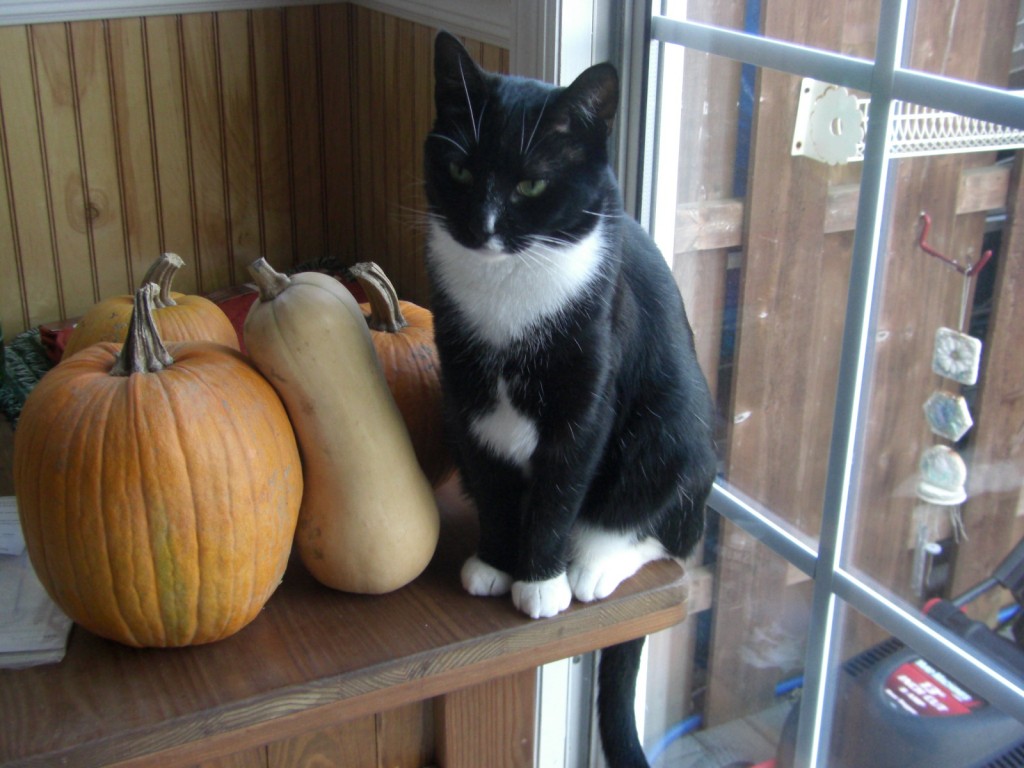 Neo tolerated the introduction of several other cats into our home in his time with us: Parker (another tuxedo cat who died after only a few weeks with us), Pilgrim (our first cat in Ithaca and Neo’s adored best friend), Gatsby (an orange tabby who died 9 months young), Julia (our torbie who was Neo’s arch enemy – always competing over lap space but in the end helped to groom him when he couldn’t take care of himself), Takei (our cherished grey tabby who died only 4 months before Neo), and Mac (our long-haired orange & white kitty who loved playing with Neo). 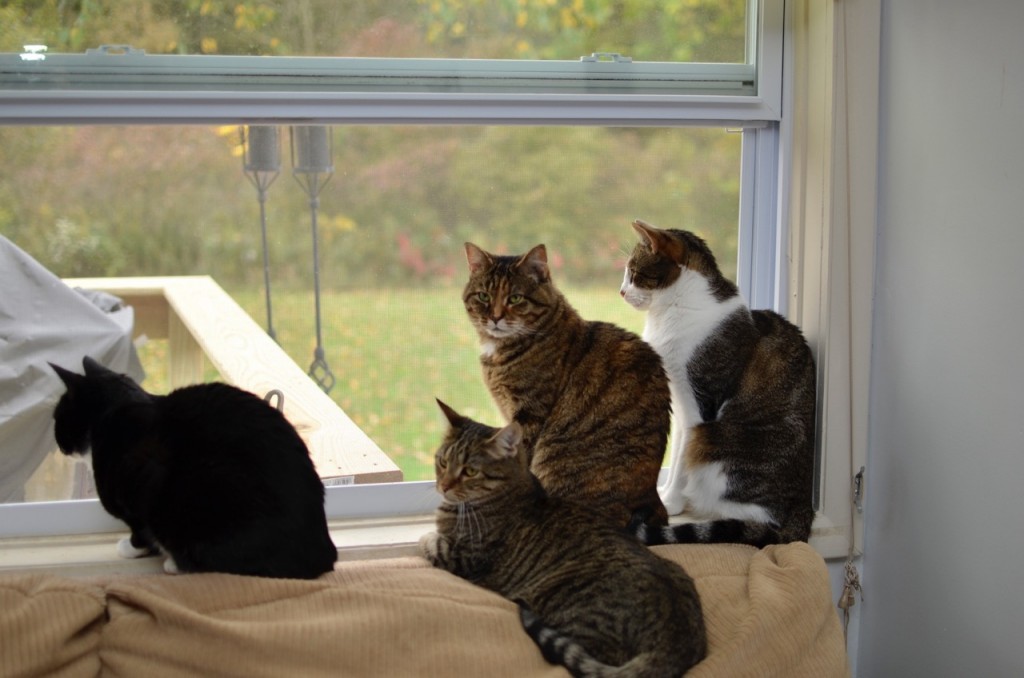 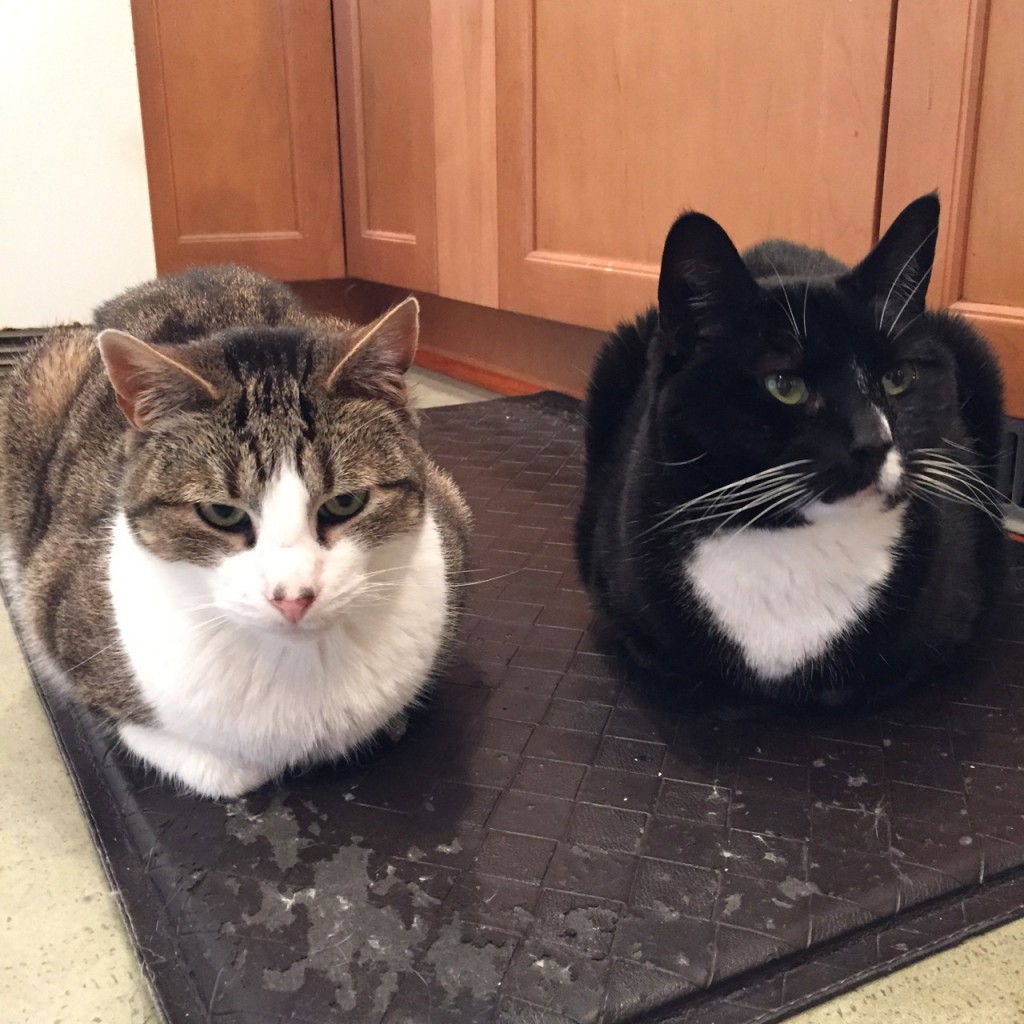 Neo was a quiet, dignified cat that only meowed when necessary. He had elegance about him and a deep emotional side that not everyone recognized or understood. He appeared visibly bothered when he witnessed Gatsby’s passing. 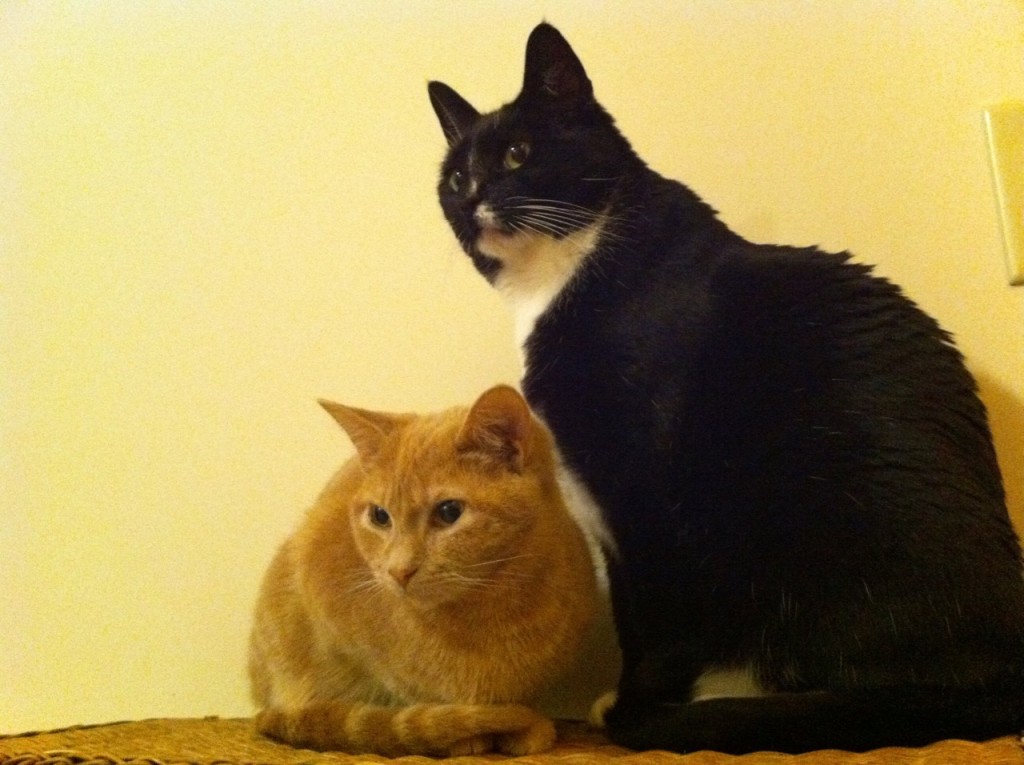 When Takei died and we had a “kitty wake” for him so all the cats could understand he was gone, Neo was the only cat that stayed by his body. He sat next to him for hours and even gave his ear a few licks. 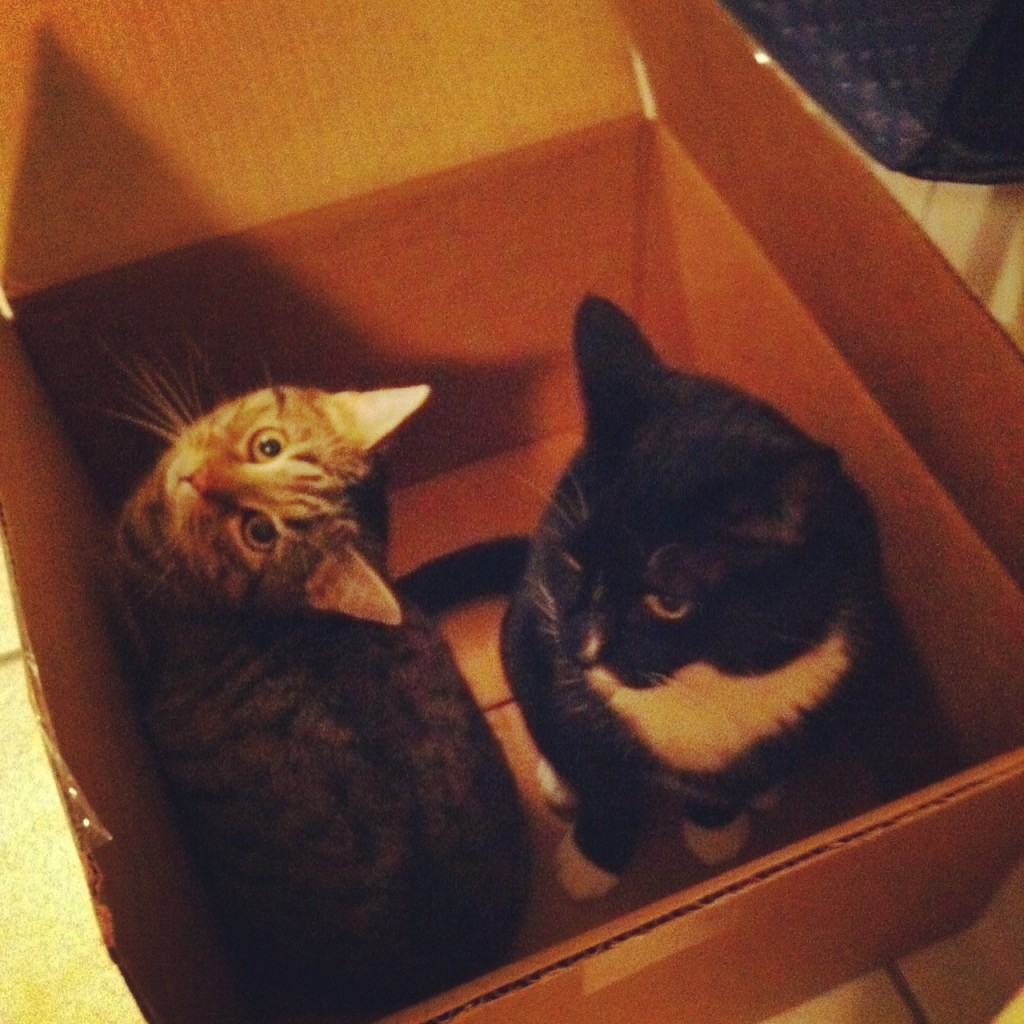 When we’d go away for a few days, he seemed upset upon our return and would run around the house frenzied, almost like he was telling us he was unhappy that we had left him for so long.

He was a wonderful and affectionate lap cat who loved to be under the covers at night cuddled in bed with me. Even though he was great at letting us clip his nails, he had a distinctive walk you could hear from the next room: a click and clack of his nails on the hardwood floors as he came closer.

When he felt warm and trusting, he would roll over and show his white belly and would lick my forehead and face. He also had an almost inaudible purr, thus earning him the nickname “soft purr” in our home. You would have to press your head against his body to hear its endearing charm. 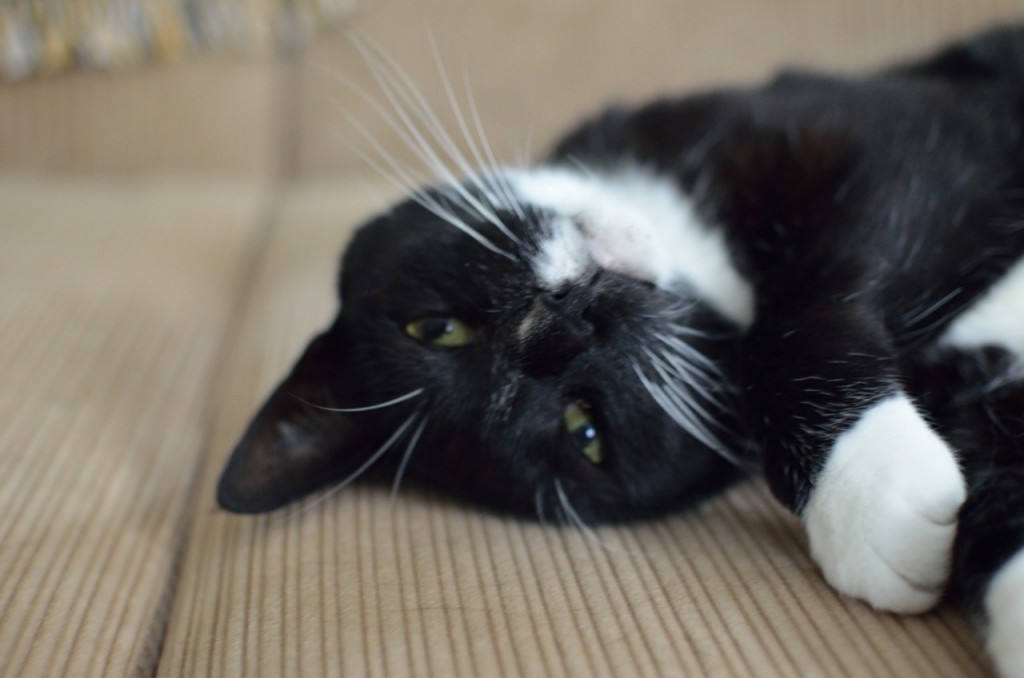 For most of his life, Neo was relatively healthy despite his FeLV status. He had to have some teeth removed at one point and the year before he died he had to have a splenectomy due to a cancerous tumor they found on his spleen. He really perked up after that up until he developed another cancerous lymphoma. His appetite kept decreasing and the vet found a large, walnut sized tumor on his stomach and pancreas that could be seen protruding from his belly if you looked closely. We started chemotherapy for him, like we had with Pilgrim and Takei previously, and he was unresponsive to treatment from the beginning. He continued to decline in health, appetite, and weight and in his last few days, even stopped grooming himself. For the first time, I syringe fed a cat, hoping to help his weight and survival, but nothing worked. He began hiding under the bed and wouldn’t eat or drink. He couldn’t even make it to the litter box and become incontinent, which we knew was a bad sign. In his last evening with us, I slept on a sleeping bag on the floor next to the bed so I could see him, reach out to him, and let him know he wasn’t alone.

We made the painful decision to euthanize him on May 7th, 2015. Luckily it was much less traumatic of an experience than Takei’s recent euthanasia on my birthday in January. Neo didn’t have the energy to fight us as we took him to the vet and I held him and kissed him right before and after the vet gave him the shots that would end his life and put him to rest. He was an angel and a gentle cat until the very last minute. 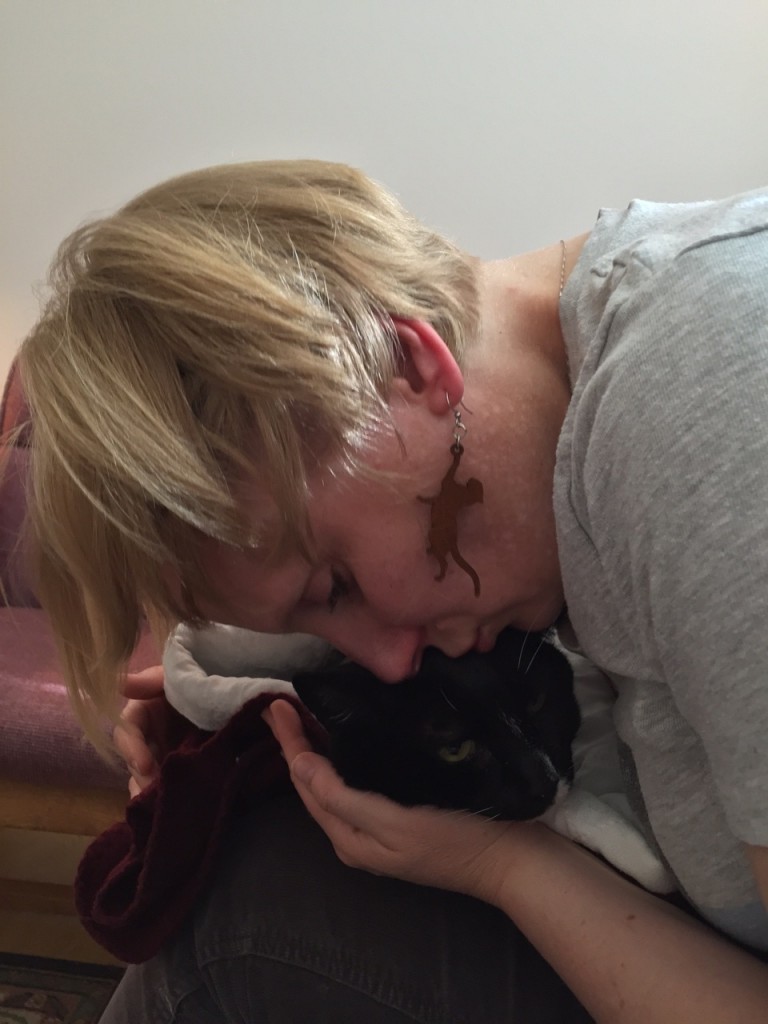 There are not enough words to put into writing what Neo has meant to me over the past 7 years with us. He outlived his life expectancy filling our home and souls with love and enduring friendship. He has been my best friend, my affectionate “cat-husband,” my comfort, and my inspiration. If it wasn’t for Neo, we would not have decided to rescue other FeLV+ cats, thus giving them a chance at life, companionship, and forever homes when so few would. He essentially helped to save so many, even if he didn’t realize it. He was part of the namesake and vision for Tuxedo Cat Bed and Breakfast. Neo was everything to me and is sorely missed. He will forever remain “the one.” 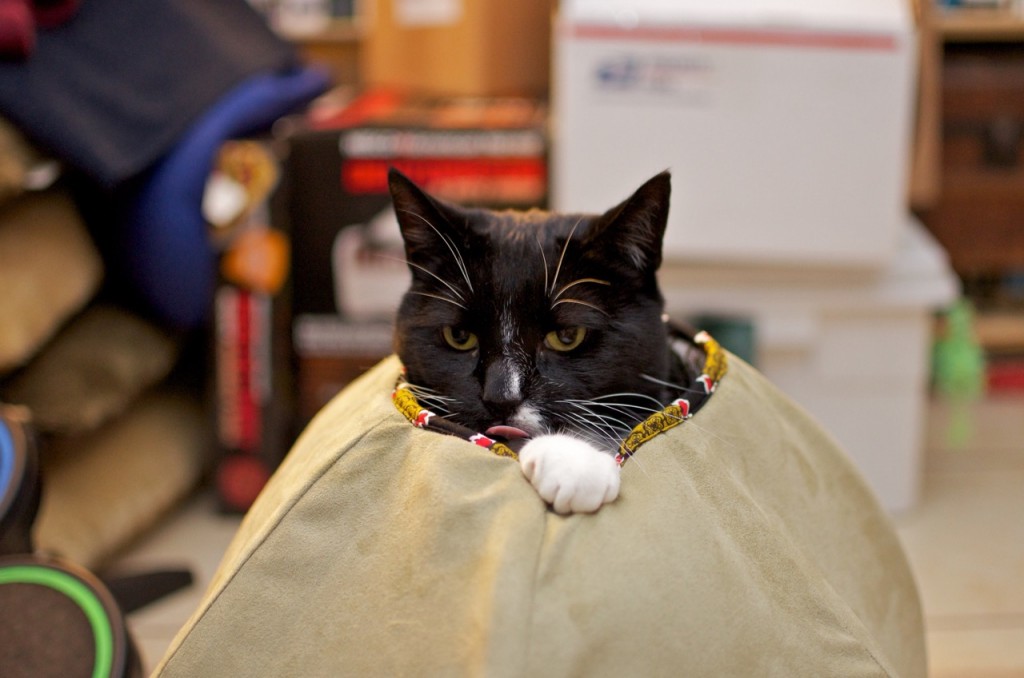