As a lover of macaroni and cheese, it’s always exciting to find a new vegan recipe. We made a vegan baked mac & cheeze adapted from Vegan Vittles by Jo Stepaniak in our latest Natural Kitchen Cooking School class. The recipe got its creamy texture, natural coloring, and nutritional value from cashews, nutritional yeast, and pimientos. In addition to the spices included in the recipe, I added fresh onions, garlic, and cayenne pepper to give it an extra punch of flavor. The cheeze sauce alone can be used for numerous other dishes, such as nachos, or in a small slow cooker for dipping crudites, bread, or crackers. The possibilities are endless!

For the pasta, I used Ancient Harvest Gluten Free Shells. Simply amazing! It is difficult to tell that these shells are gluten-free and they held onto the cheeze sauce like you’d expect them to. The pasta was baked in a 4 ounce ramekin, which made it not only adorable to eat, but also helped to reduce the chance of overeating (as you will want to keep devouring this cheezy goodness)! The dish was garnished with gluten-free bread crumbs, paprika, and parsley.

I served the mac and cheeze alongside cream of broccoli soup topped with shiitake bacon and a spinach salad with english cucumbers, toasted pumpkins seeds, and balsamic vinegar. This is one meal you won’t want to miss! In the words of Corey from Say Anything, “Get ready for greatness, Lloyd!”

Overall, I’d rate this meal as a strong 3 1/2 out of 5 carrots on the veganlicious scale.

It has been very cold here in upstate New York lately and this creamy soup from the Nava Atlas’ Vegan Soups and Hearty Stews for All Seasons certainly hit the spot. Inspired again from my homework assignment by the Natural Kitchen Cooking School to make at least one recipe from Nava Atlas’ book from our “Soups and Stews” weekend coursework, I got to work on this one. Considering we received many root veggies such as parsnips, potatoes, and carrots in our CSA lately, it made perfect sense to use them up in this dish. To make it creamy, I used a combination of rice and soy milks and my handy, dandy immersion blender. If you don’t have an immersion blender yet, you must get one. In the words of Ferris Bueller, “It is so choice. If you have the means, I highly recommend you pick one up.”

Whenever I prepare a soup for dinner, I like to make some green side dish, whether it be a crisp salad or some sauteed greens. For tonight’s green, I sauteed some organic, local spinach from our CSA and topped it with the leftover Cashew Tamari Dressing from our recent Popcorn Tofu Hoagie feast. The recipe can be found in the Sunny Day in Texas (a vegan cookzine for charity). Buying the zine for the tofu and dressing recipes alone (courtesy of Wheatsville Co-op) is so worth it (not to mention you’d be helping out a great animal charity).

Overall, we’d rate this meal as 4 carrots out of 5 on the veganlicious scale!

Wanting a quick, but tasty and healthy dinner one night, I decided to throw together some white beans, sauteed spinach, and sweet potato with some garnishes and sauces and came up with this creation. It was a wonderful combination and the cilantro, salsas, and sour cream helped to finish out the flavors.

This can be made with any variety of cooked white beans. I used navy beans in this recipe but cannellini beans work nice as well. Warm your tortillas and add the spinach, white beans, and sweet potato slices. Add cilantro, sour cream, and salsas and wrap tightly. Garnish the top with cilantro and serve immediately. 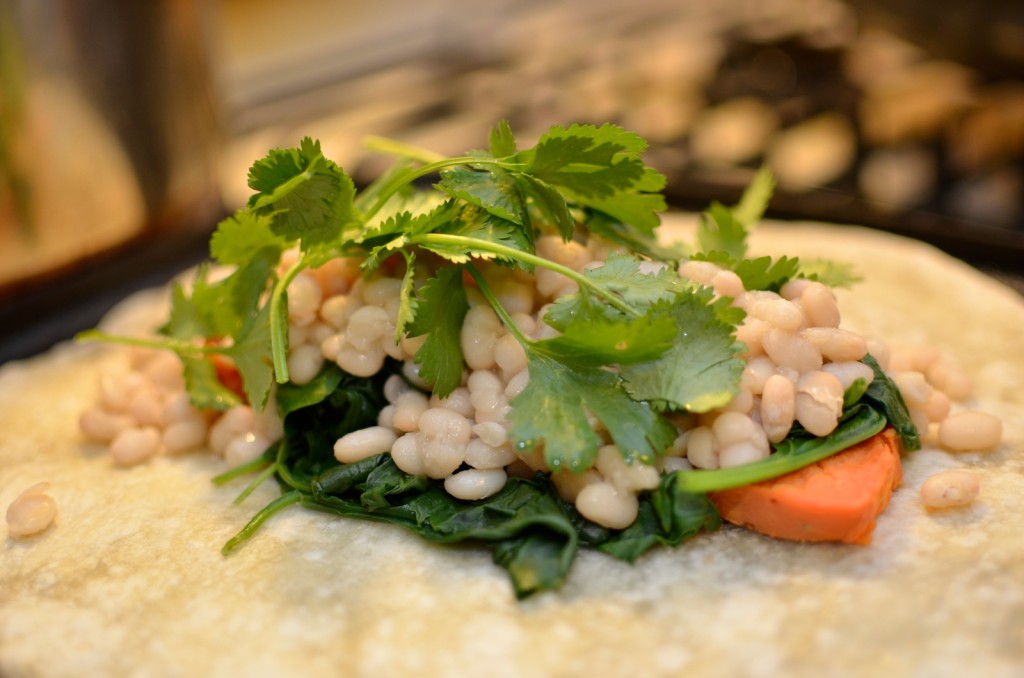 I love Italian food and trying to recreate dishes that I find on menus in fancy restaurants. One night I was looking at menus online for a new town I planned on traveling to and noticed butternut squash & ricotta stuffed shells being offered at a restaurant (that I don’t recall now). It sounded like a fun challenge. So using the recipe for Stuffed Shells (the spinach filling) of page 106 of Louise Hagler’s Tofu Cookery as my base, I got started.

Preheat oven to 400 degrees. Cut a butternut squash in half, placing both halves face down on a cookie sheet. Bake for a least one hour so that squash becomes softened. Remove from oven when finished and scoop out seeds. Next scoop out the squash and place in a large bowl. Mash the squash with a fork or potato smasher. Add salt and pepper (to taste) and mix with the squash.

Follow the directions for the spinach & tofu stuffed shells, making sure to add 1-2 TB of butternut squash into each shell before adding the tofu ricotta mixture. Follow the rest of the instructions for baking in the above recipe by Louise Hagler.

This was easily a 4 out of 5 carrot recipe on the veganlicious scale!