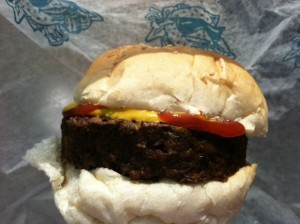 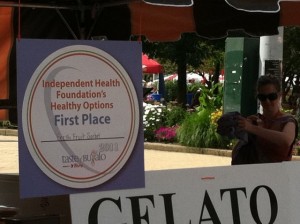 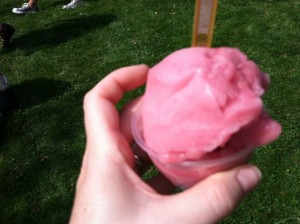 We recently went to Niagara Falls for our 1 year wedding anniversary. On the way, we stopped in Buffalo, NY to eat at Merge. Merge is a very vegan-friendly restaurant that I had heard good things about. Making a decision on what to eat was difficult. I ordered the following: Fuji Apple white wine (from Niagara, NY,) Seitan Hot Wings, Vegan Pizza, and vegan Amaretto Chocolate Mousse for dessert.

Truly the beginning and ending were the best of the meal. The Fuji Apple white wine was delicious! It was crisp, sweet, and reminded me of a lighter hard cider (which I’m notorious for ordering). The vegan Amaretto Chocolate Mousse was creamy, chocolate-y, and amazing! 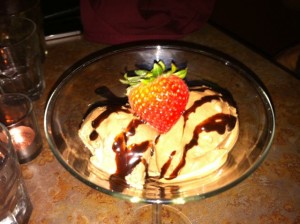 I was less impressed with the Seitan Wings. When they came out, I thought (and rather hoped) they were tofu cubes. They were made of densely packed wheat gluten and didn’t quite have the texture I was expecting or hoping for. The hot sauce it was sauteed in was very good though. 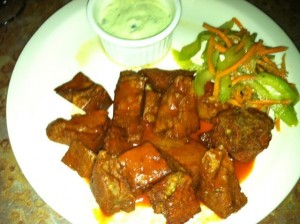 I was warned in advance by our waiter that the Vegan Pizza (topped with broccoli, red onion, tomato, & a basil cashew cheese) was made on gluten-free dough. I took the chance to order it anyway. It looked delicious but was disappointingly bland. The cashew cheese was what sold me on ordering it, but it lacked the flavor and punch I wanted. I feel if there was a red sauce underneath, I would have enjoyed the pizza more. It had me re-thinking my order and wishing I had gotten the raw pizza instead. Oh well. 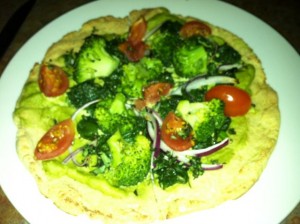 This place certainly is no Horizons (our favorite upscale vegan restaurant in Philadelphia that recently closed down), but it’s refreshing to see so many options in one place. The ambiance, decor, and musician playing a cover of Mazzy Star’s Fade Into You made it a classy place to eat. I’d give it another go around, but would definitely order different main dishes the next time.

I give it 3 out of 5 carrots on my veganlicious meter!