A friend recently asked me what I usually made for lunch. This got me to ponder what I actually eat (since most of the time I focus on making hearty meals for dinner). Most of the time I eat leftovers from dinner from the night before. I decided to start documenting the times though that I do find myself making an original lunch.

This meal was brought to fruition from some leftovers I had in the fridge (i.e. black beans & black olives), some of my staple convenience foods (whole wheat tortillas, Daiya cheese, Tofutti Better Than Sour Cream, salsa), and some CSA food (kale).

It was very easy to make. I warmed a whole wheat tortilla in a skillet on the stove and added some Daiya cheese until it started to melt. I reheated some beans with chili powder and put them on the taco. Lastly I put some raw ripped kale leaves, sliced black olives, and some vegan sour cream and salsa on top. Voila! Instant, easy, and tasty! 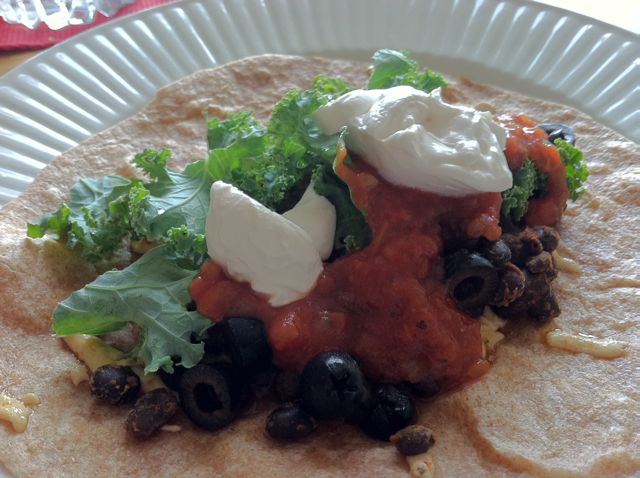 When we were on a recent trip, we stopped in Columbus, OH at Northstar Cafe in Short North, which is known for their awesome veggie burger (just made of beets, black beans, and brown rice). It is so good, even omnis rave about it all over Yelp (see their reference to the Northstar Burger).

I had not thought of the burger until this past week, when I got a bunch of beets in my CSA and I was trying to figure out what to do with them. I did a Google search, and found others who were so inspired by the Northstar Burger, that they attempted to duplicate it in this recipe.

The only minor changes I made were to use 1 cup of brown rice (to get the intended effect of the actual Northstar Burger), added more flour (at least double or triple their recommended amount of 2 TB) and some Ener-G Egg Replacer after the first batch, seeing as it needed more binding. I also did not include cheese on this burger. *For my gluten-free friends, this could easily be made GF by using all-purpose GF flour instead of white flour in the recipe. Additionally, you’d want to put it on a GF bun as well.

The burger fell apart a bit at first (before I figured I should put more flour in the mix), but the taste was delicious and savory. We served it up with grilled kale chips, which you’ll recognize from one of my previous posts.

Overall, I give the beet burger recipe a 3 1/2 out of 5 carrots on the veganlicious scale!

Still having a lot of chickpeas leftover from the other night, as well as some CSA produce, I decided to whip together another tasty summer meal. Here is my own recipe for a simple cucumber & chickpea salad. My omni husband said it was “surprisingly filling!”

Put sliced cucumbers in a non-porous bowl. Pour white vinegar and water in the bowl with the cucumbers. Add dill, salt, sugar, and pepper and mix well. Then add the scallion and onion and mix again. Finally add the chickpeas, mixing together. Let sit in the refrigerator at least 1-2 hours, mixing at least once during this period. Serve when ready.

I had 2 heads of napa cabbage from our CSA share last week that I didn’t know what to do with. I soaked them thoroughly in a bowl of water and some vinegar to get any bugs off and to clean the leaves well.

Then I got inspiration from this About.com recipe for grilled napa cabbage. We didn’t use skewers though and just grilled the leaves individually on foil on our gas grill. The leaves that were tastiest were the ones that were burnt and crispy.

Overall, this was a very tasty, healthy, and easy meal to prepare. I also used some leftover hamburger buns to make an impromptu garlic bread. If you were to omit the garlic bread (or had some GF bread), this meal would be gluten-free.

Having an abundance of swiss chard and other yummy veggies left from my CSA share this past week, I thought it would be a good idea to have a delicious and nutritional meal using my produce.

I found an amazing and simple recipe at allrecipes.com for this delightful summer meal. I made some minor additions,  such as using 2 cups of garbanzo beans (aka chickpeas) instead of only 1/2 cup, adding some chopped garlic scapes, and a pinch of cayenne pepper to spice it up.

I had a wonderful one pot meal with some garlic bread for tonight’s supper! This dish was filling, flavorful, and good for the body. 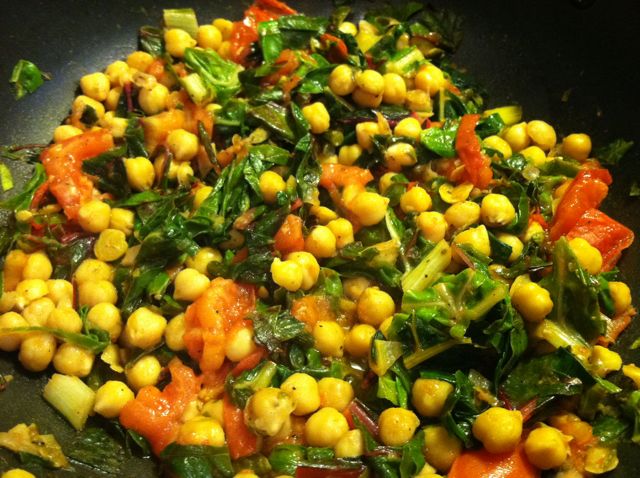 Overall, I give this recipe a 4 out of 5 carrots on my veganlicious scale!