I’ve owned the beloved cookbook Tofu Cookery by Louise Hagler since my beginning days of vegetarianism. While I’ve had the cookbook for years, I only recently made the tofu balls that so many PPKers, particularly Isa Chandra Moskowitz herself, raves about. I didn’t have regular peanut butter, so I used the chunky version I had on hand. It made for a slightly crunchier tofu ball, but definitely worth the switch. I don’t think I cooked the balls enough (or I could have made them a tad smaller). They reheated well the next day and actually were slightly better then (perhaps because they were cooked more thoroughly).

I used some store bought whole wheat spaghetti and marinara sauce and topped them with the tofu balls, for a classic “spaghetti and meatballs” feel.

Overall, we’d rate the tofu balls a solid 3 1/2 out of 5 carrots on the veganlicious scale!

My husband is a bit of a falafel connoisseur and I read some great reviews of L’As du Fallafel on many sites. They are so famous, they even have a wikipedia page. We decided to get counter service, which was a littler cheaper than eating inside. The line moved quickly and efficiently. A waiter took our order while we waited in line and gave it to the cooks who prepared our sandwiches with amazing speed before our very eyes.

We got the signature vegetarian falafel sandwiches which were filled to the brim with falafel, eggplant, hummus, hot sauce, and other fillings that I cannot name. The falafel was fried to perfection and all the flavors blended well together. The “hot” sauce was not very hot at all, but otherwise it was one damn good sandwich.

I also have to mention that our time in Paris (and in France in general) was filled with mostly good service and friendly people. This is of course a contrast to what we were expecting with the stereotypes that the French hate Americans and would be rude to us. A time of kindness that sticks out was when I was asked something about my order in complete French here at L’As du Fallafel. I don’t speak or understand any French, so I looked at the cook with a blank stare and said I didn’t speak French. A woman standing behind me in line was kind enough to translate for me in English and indicated he was asking what I wanted to drink. I was very surprised and appreciative.

We ate our falafel sandwiches around the corner from the restaurant at a little park area on Rue des Blancs-Manteaux as recommended from molasses jane on the PPK “Paris is not vegan hell! The official France thread.” Actually, much of what molasses jane posted on this thread was extremely helpful in choosing veg-friendly places in France. I recommend checking it out. Thanks molasses jane!

We thoroughly enjoyed the sandwiches and my only regret is forgetting to order the homemade lemonade that molasses jane recommended.

Overall, we rate our meal as 4 1/2 carrots out of 5 on the veganlicious scale.

By far, some of the best cupcakes ever are the Fauxstess Cupcakes from Vegan with a Vengeance by Isa Chandra Moskowitz. I’ve made these numerous times and brought them to many potlucks and parties. The combination of the dark chocolate cake, ganache topping, and creamy filling make for a perfect cupcake. You can find the recipe on the Post Punk Kitchen.

These cupcakes are a definite 5 out of 5 carrots on the veganlicious scale!

The last two weekends we’ve had awesome vegan activist friends visiting us from out of town. One of my friends, Victor Sjodin, who works for Vegan Outreach, just got his website up where you can purchase UnFuck the World: Go Vegan t-shirts! Check it out.

To fill their bellies and satisfy their palates, I wanted to give them savory and sweet dishes from one of my favorite cookbooks: Vegan Brunch by Isa Chandra Moskowitz.

I made the Perfect Pancakes which are fabulous with a cinnamon twist! To make them a tad healthier, I used half all purpose flour and half whole wheat pastry flour as the base.

A wonderful complement to the sweetness of the pancakes with maple syrup is the Swiss Chard Frittata. The recipe can be found here on The Post Punk Kitchen.

Both of these dishes have become a quick favorite of mine. Separately and together, these dishes are a perfect 5 out of 5 carrots on my veganlicious scale! 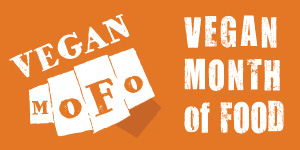 I am participating for my very first time in Vegan MoFo! This is the 5th year of the annual tradition that was started by Isa Chandra Moskowitz, vegan chef, cookbook author extraordinaire, and madame of The Post Punk Kitchen (affectionately know as “The PPK”)! Last year, 800 bloggers around the world participated. This year the blogging begins on October 1st and goes for the entire month.

Vegan food bloggers post to their hearts content about their culinary creations or those of others. You can sign up to participate here. Visit the new VeganMoFo headquarters for updates and roundups during October. Or grab a VeganMoFo banner for your blog.

I plan to include hearty comfort food, recipes, restaurant reviews, Halloween-themed posts, and anything else I can think of to make my readers drool with antici-pation.