On an overcast October 7th, 2012, hundreds of protesters descended upon Marineland in Niagara Falls, Ontario again for the closing day of the season. By now, dozens of news stories have been written around the world about Marineland and the atrocious conditions that the animals imprisoned there have to endure. They are barely surviving, and certainly not thriving, in those concrete tanks or on barren dry land. 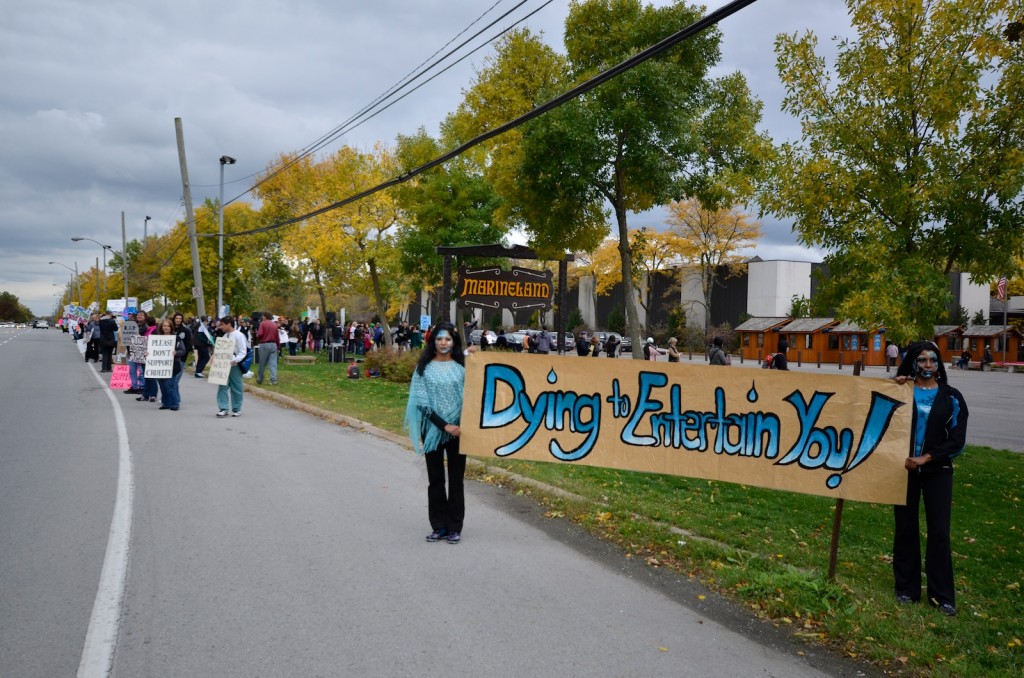 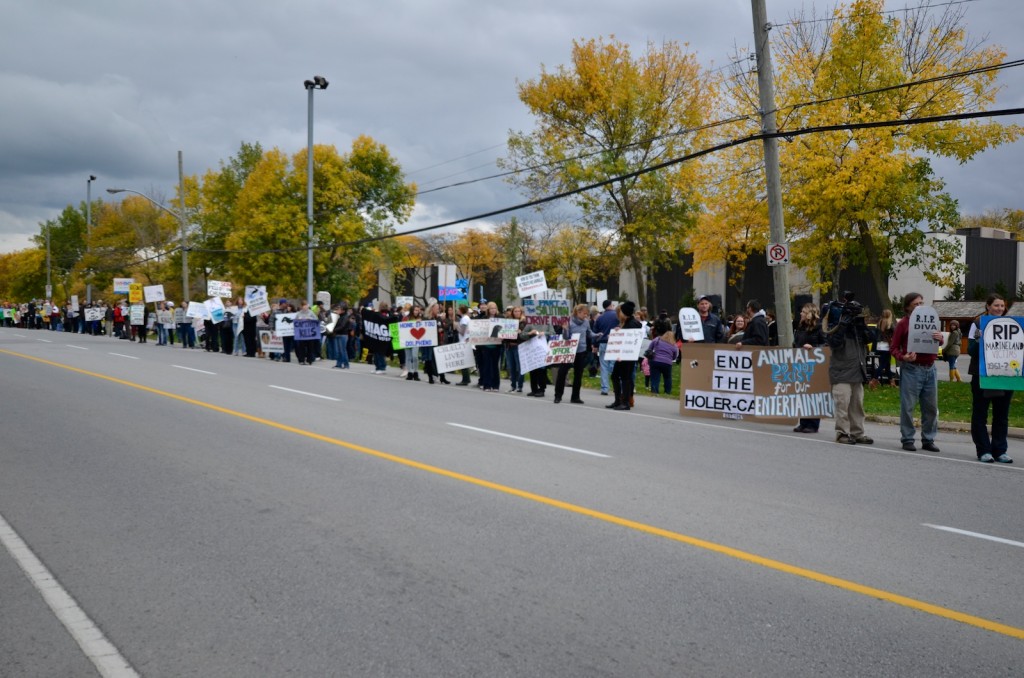 The day was punctuated by amazing activists and speakers, some including but not limited to Dylan Powell (organizer with Marineland Animal Defense (M.A.D.), a campaign of Niagara Animal Defense League), Phil Demers (ex-trainer at Marineland who broke the story of abuse and neglect), Spandy Andy (former employee of Marineland), Cheri DiNovo (MPP for Parkdale – High Park), and the well-known activist Ric O’Barry (founder of Save Japan Dolphins and star of The Cove). 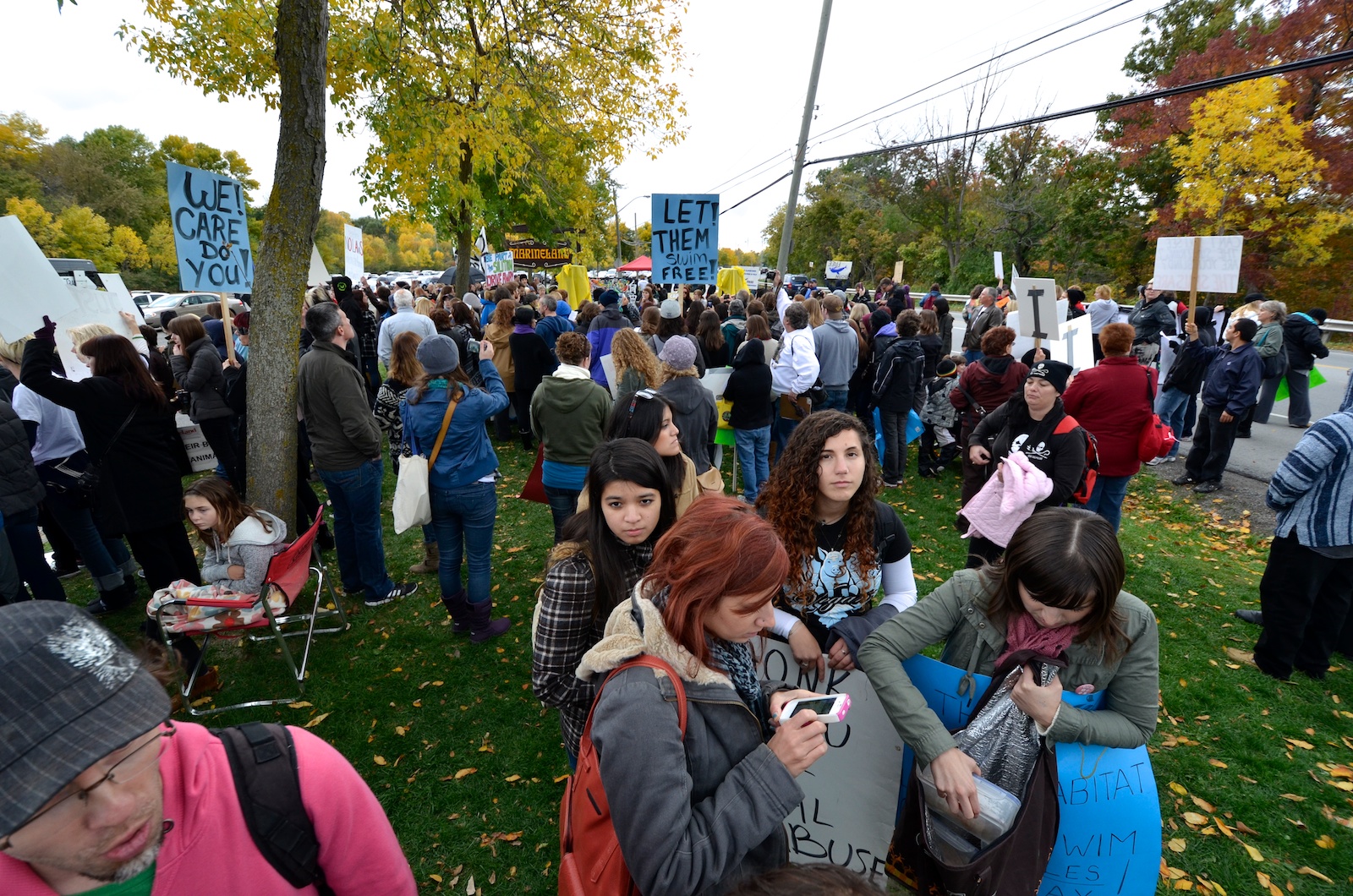 We knew from the momentum that M.A.D. had been gaining over the past few months and the word spreading all over social media and the news, that this last demonstration of the season would be memorable. It had been estimated that anywhere from 600-800 protestors from all over came out on this day. M.A.D. even arranged for buses to pick up demonstrators from several regions in the area as well. 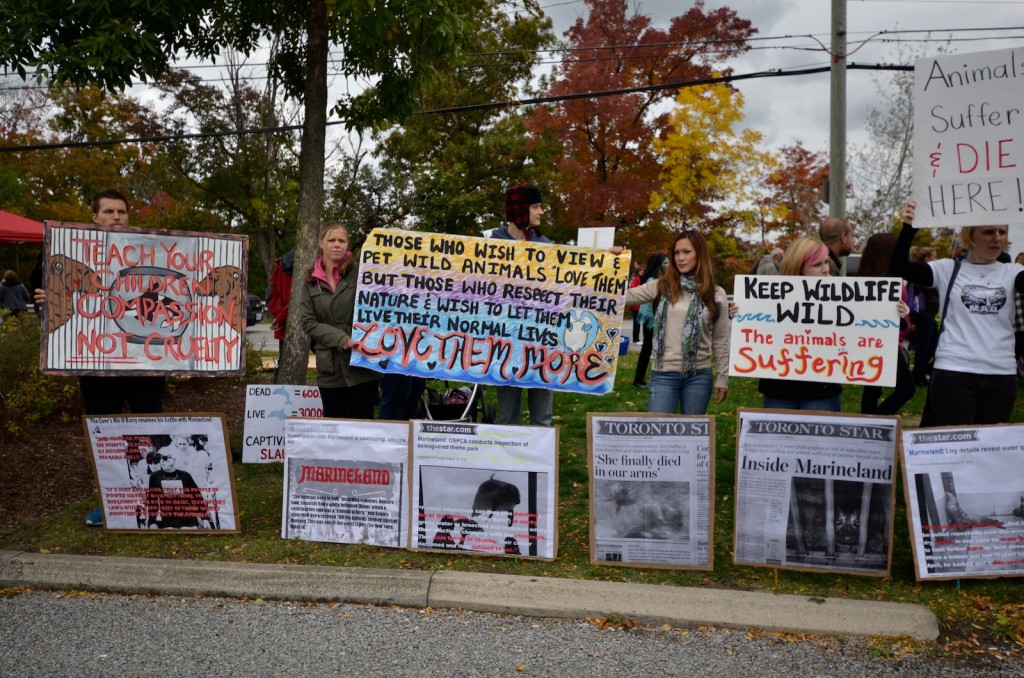 I was so moved and motivated by the last two demonstrations we had attended in August, that I brought two close friends up from Philadelphia with me to be a part of this epic day. I am so glad I did. The energy was electrifying. There was music, dancing, vegan baked goods, a raffle for The Cove and M.A.D. gear, and inspiring statements from the aforementioned leaders and activists.

I felt particularly vocal and riled up during the day and found myself projecting my voice (sans bullhorn) to visitors of the park, expressing my disapproval. At one point I saw a fancy small black tour bus pull up and several small children got off with their parents. I felt disgusted and without hesitation, I yelled out, “You’re bringing your kids here? This place is terrible! Don’t go in!” Later in the day, I noticed a group of people who had gotten off a tour bus and were just hanging outside of the park. I called out to them, “Come and join us. We have signs for you. We’re having more fun. We have dancing and cupcakes!” Eventually they came over to our side, took some signs, and said they didn’t intend on going in after hearing our message about the animals. We all cheered for them and told them they made the right choice. As they eventually returned to their bus to leave with those who went in returned, they looked back at us and smiled and waved. We gave them a standing ovation as they headed on their bus to leave. 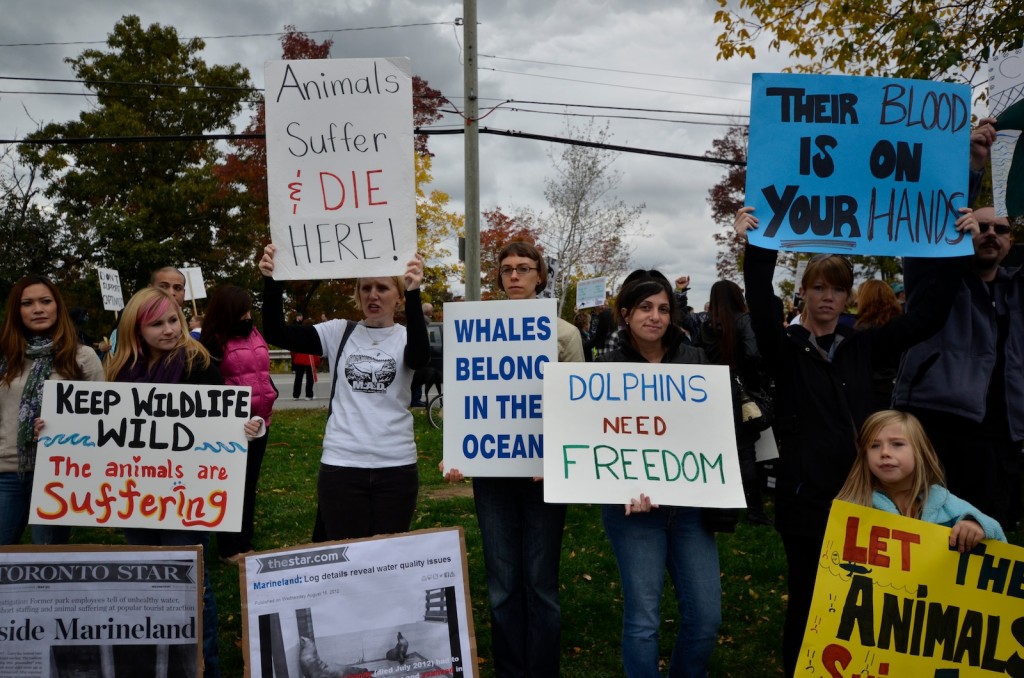 Before he went on to speak to a crowd of hundreds, we got to meet Ric O’Barry. Ric was very friendly and accommodating to those who approached him for a picture, autograph, or quick hello. I had recently purchased his book, Behind the Dolphin Smile: One Man’s Campaign to Protect the World’s Dolphins, electronically and told him so. He was impressed that someone had bought the Kindle version and made it known. I admire the fact that he, while in his 70s, is still tirelessly fighting to end the dolphin entertainment industry that he once helped to start.  CityNews Toronto was on the scene to film the demonstration and we can be seen with Ric at 2:07 minutes in during his interview with their reporter Shauna Hunt. He’s one hell of a human being in my book.

The highlight of the day happened during the one time I decided to take a bathroom break. In the distance from the bathroom at a nearby park, I heard police sirens and wondered if it had anything to do with the demonstration. Upon my return, I ran into a group of people who said many demonstrators went into the park and the cops came. It turns out that well over a 100 people spontaneously walked into the park (or “stormed in” as described by some in the media), made their way to the nearby dolphin show with signs and chants, and closed it down for the day. The energy was amazing. There were no arrests and no injuries, but some police intimidation and excessive force reported with one of the demonstrators who went in.

The energy, enthusiasm, and fight for what was right was exhilarating, and at times, overwhelming. People came from far and wide to speak, express their dissent and disgust with Marineland, and to help educate those who were patronizing the abusement park about the harsh realities of captivity.

One woman whom I met briefly, Suzanne Lemire, brought old photos of some of the animals in Marineland from when she and her family had visited the park over 20 years ago. In her new awareness, she wanted to make amends to the animals and to rid herself of those photos, which she did by ripping them apart outside of the park. She vehemently expressed her wishes (at 2:42 minutes in this video) to, “Shut it down!”

Since the October demonstration, much has happened. One of the former trainers, Christine Santos, came forward and described in detail for The Star how Kiska, a killer whale, had been bleeding off and on since July and was getting progressively worse. To date, there have been at least 15 whistleblowers who have come forward to reveal the atrocities happening behind the scenes at Marineland. There have been demonstrations outside of the homes of Marineland’s owner, John Holer and their veterinarian, June Mergl.

In response to these demonstrations and allegations, Holer has filed lawsuits of $1.5 million against Dylan Powell, one of the M.A.D. organizers, and one for $1.25 million against Christine Santos, an ex-employee. What an absurd and sickening world we live in. A man who has spent decades running a park that confines and abuses animals on a regular basis, treats his fellow humans with no respect as well (let us never forget Paula Millard and the folks from GoHomeless.ca), and now has eyes on him for potential environmental pollution from the mass graves at Marineland, has the audacity and ability to throw expensive lawsuits against people who are standing up for what is right and calling him out on his inhumanity.

The stories of bravery and tenacity of so many of the activists I have met along the way at the Marineland demonstrations have been inspiring and harrowing. I was impressed with John B.’s persistence with giving out leaflets and putting himself in precarious positions just to get the message out. I saw him trying to give passengers in cars coming and going to the park literature and newspapers about the troubles with Marineland. At one point, he even made his way onto a tour bus and passed out leaflets to those inside. During the times I met him, he arrived alone to the protests, but kept on with the message, strong and proud. Now that’s dedication.

The fight is not over. It will continue to persist if humans think we can imprison sentient beings for profit and entertainment and if witnesses to this madness do not speak up for justice. We all have the power to do something, say something, and to spend our dollars wisely. If you do only one thing after reading this, heed Ric O’Barry’s words, “Don’t buy a ticket for a dolphin show.” Watch this short documentary, Into the Water, by local college students about Marineland. Hear Phil Demers passionate plea trying to save Smooshi. And do something. 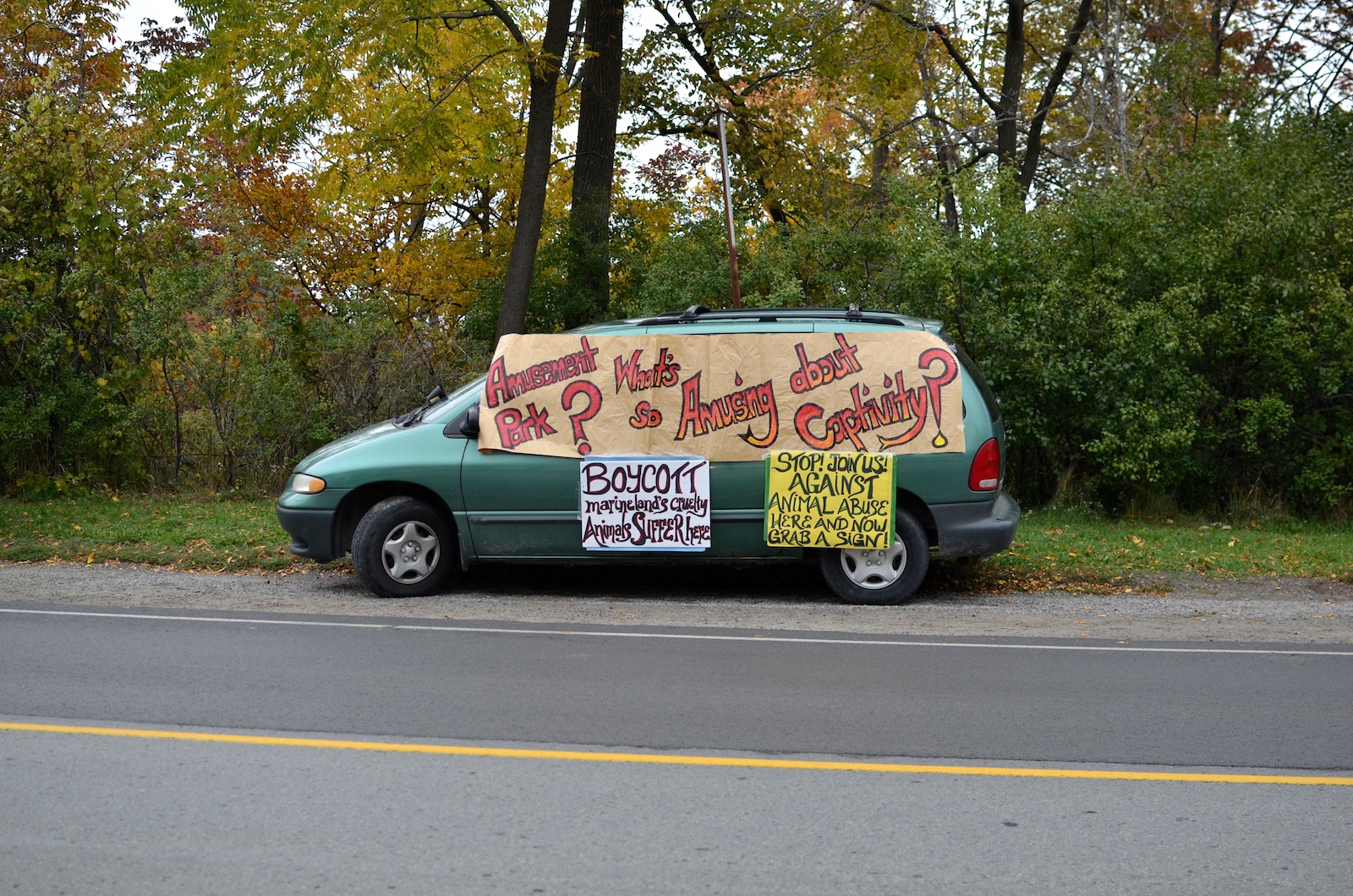 Other ways you can help the animals and support the fight against Marineland:
Legal Fees Mounting – Support whistleblower Christine Santos in her defense at Indigogo
Become an ADL Sustainer – This supports the Marineland Animal Defense (M.A.D.)
Legal Fund for Dylan – Go to Paypal & support Dylan Powell’s defense fund at marinelandanimaldefense@gmail.com (indicate “Legal Fund for Dylan” in the subject line)
Marineland Animal Defense – Attend any of the upcoming demonstrations, follow Operation Shut It Down, and write to local government officials