“There are only two kinds of people in the world. The Irish and those who wish they were.”
– Irish Saying

While I know that St. Patrick’s Day is a mostly Irish-American phenomenon, it was something I’ve enjoyed celebrating in a very green way from my childhood until now. When I was in grade school, my mom would temporarily dye my hair bright green with food coloring and send me to class decked out in all green clothes as well. My teachers got a kick out of this and would show me around to different classrooms so everyone else could see my green garb from head to toe. This all stopped one year when it took 3 weeks for the green to wash out of my very platinum blonde hair! Yikes.

Nowadays, I’m lucky if I remember to wear any green on St. Paddy’s Day, but I definitely get my green food and viewing on! This year we dined on colcannon patties, Gardein Turk’y Cutlets with gravy, roasted romanesco cauliflower via Brooklyn Farmhouse, Crooked Carrot’s spicy escabeche, and veganized Bailey’s Irish Cream from Oh She Glows! 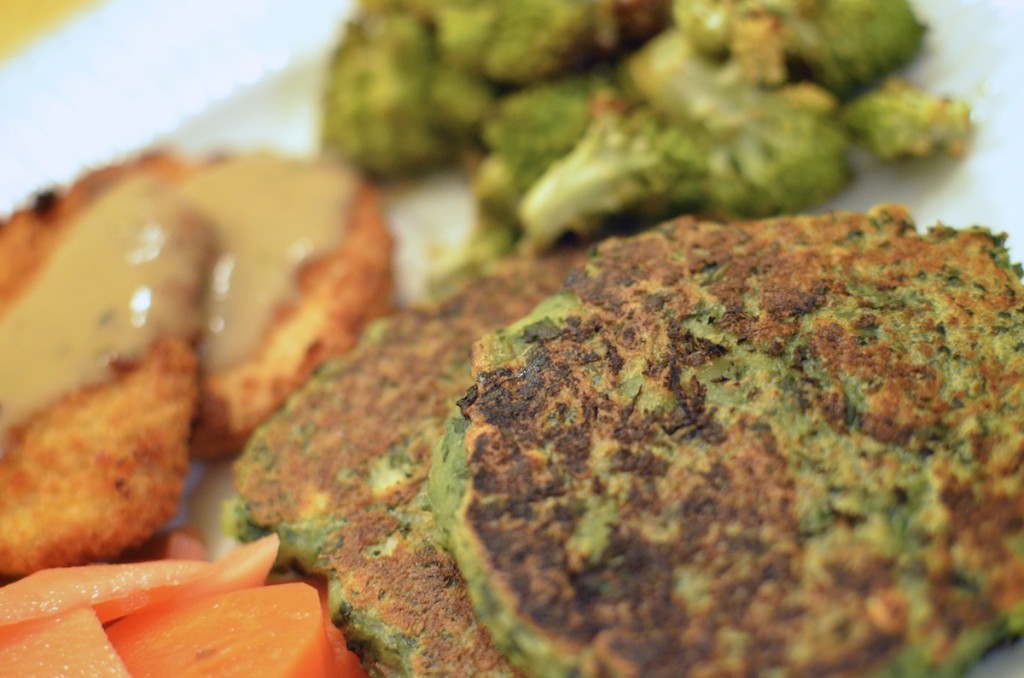 I think the colcannon patties were the big hit with Mr. Tuxedo Cat. I used this recipe from FatFree Vegan Kitchen for colcannon puffs and flattened and fried them on my cast iron skillet to save time. This was a great way to get a lot of kale and potatoes into our meal in a fun medium. 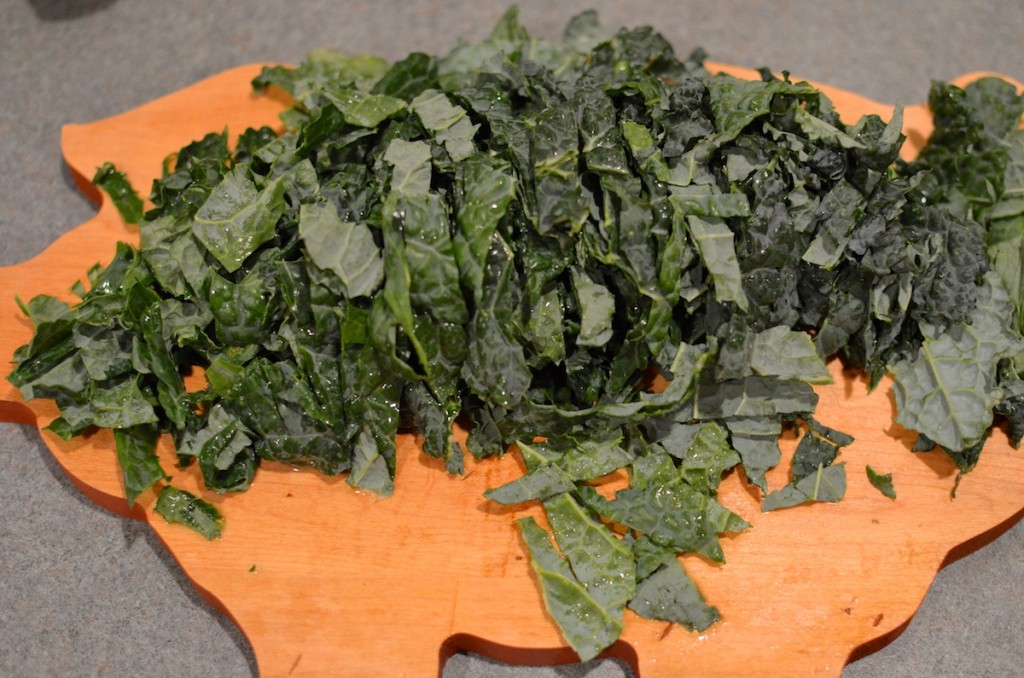 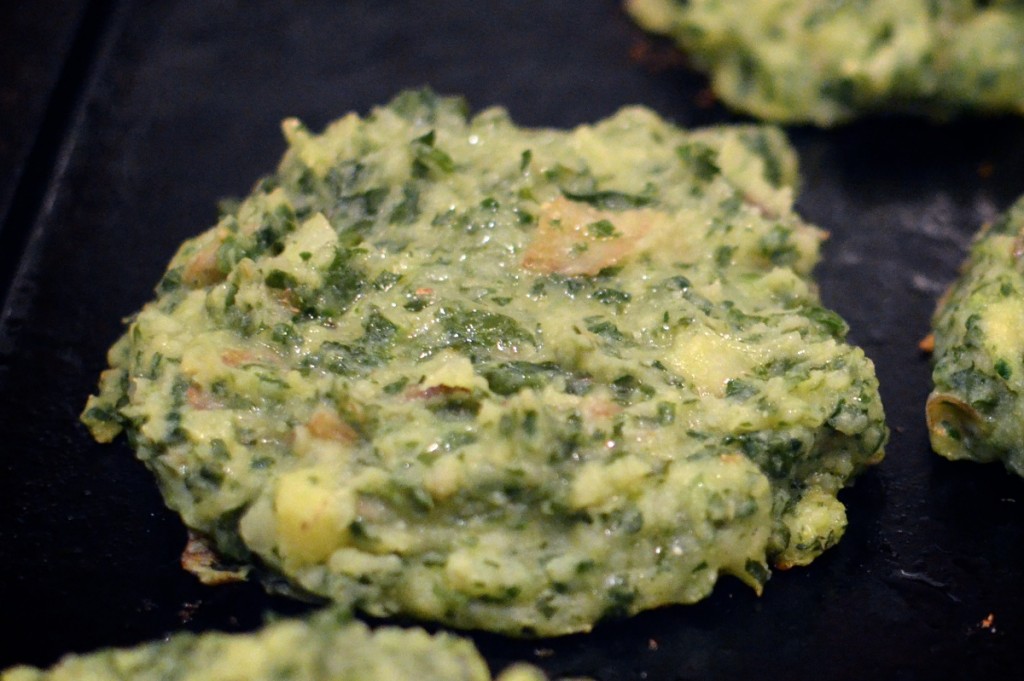 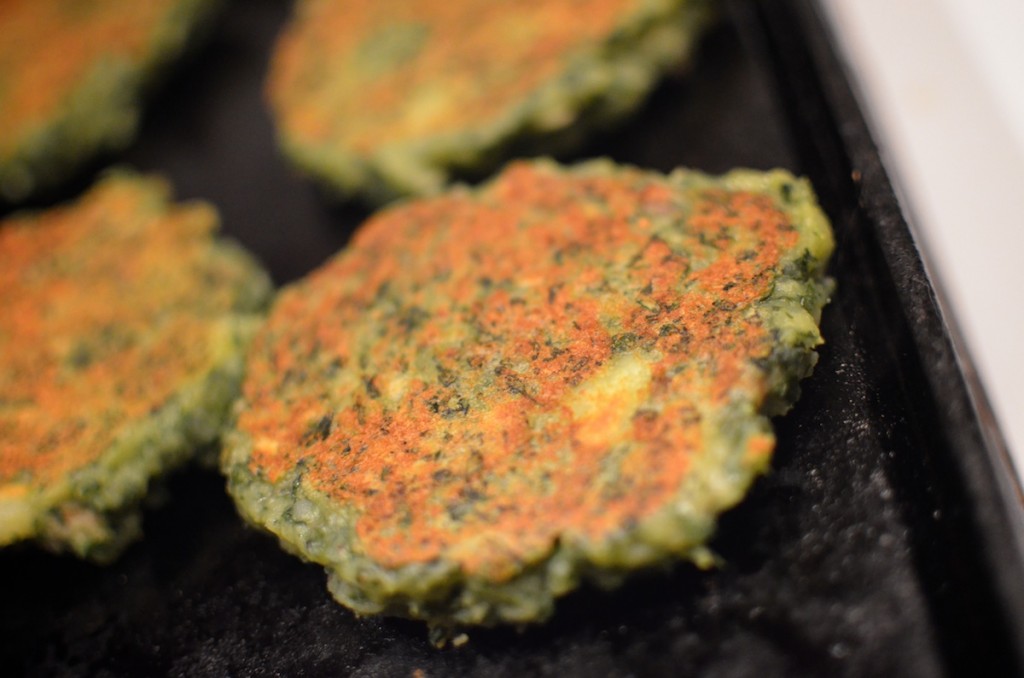 I was delighted to find the romanesco cauliflower at our local co-op, which is a green colored veggie that looks like little Christmas trees. Perfect for our green-themed dinner! 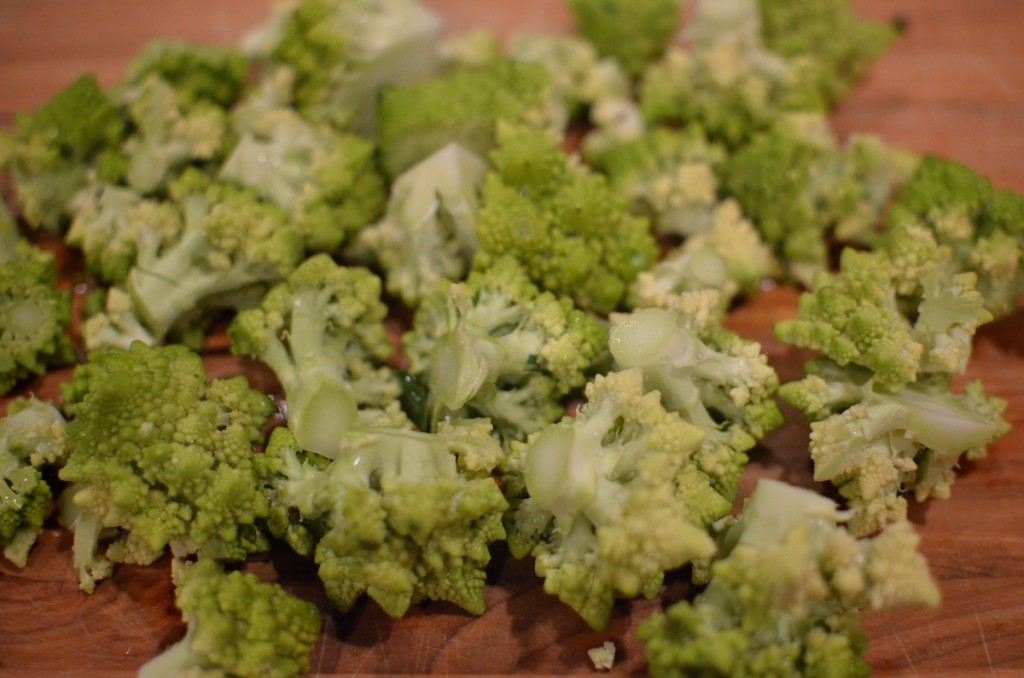 While pickled carrots are probably not the most traditional Irish meal, I found it made a great addition to the flavor profile for the evening.

As a big fan of Gardein’s products, I was glad that I had some Turk’y Cutlets with gravy leftover in the freezer from a big sale I was lucky to hit around Christmas time. These went perfect with everything else. 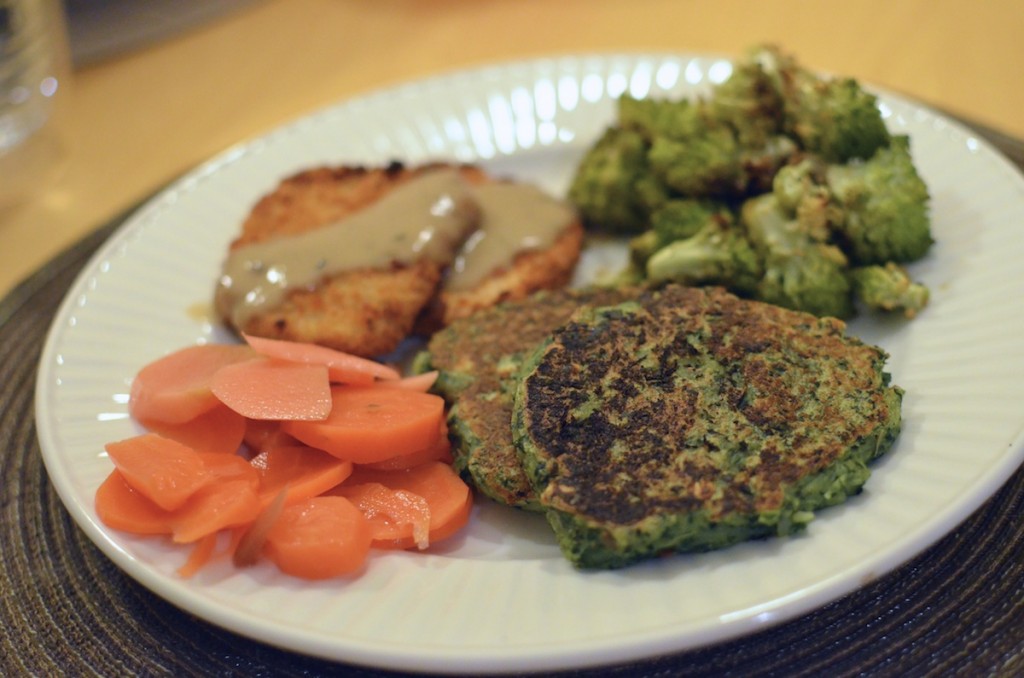 A couple of years ago a friend made a vegan Irish Cream for us, but I’m not sure what recipe was used. A quick search online landed me the easy-to-make and very delicious recipe from Oh She Glows. I don’t even like coffee or whiskey, but this hit the spot and was like a divine dessert after supper. 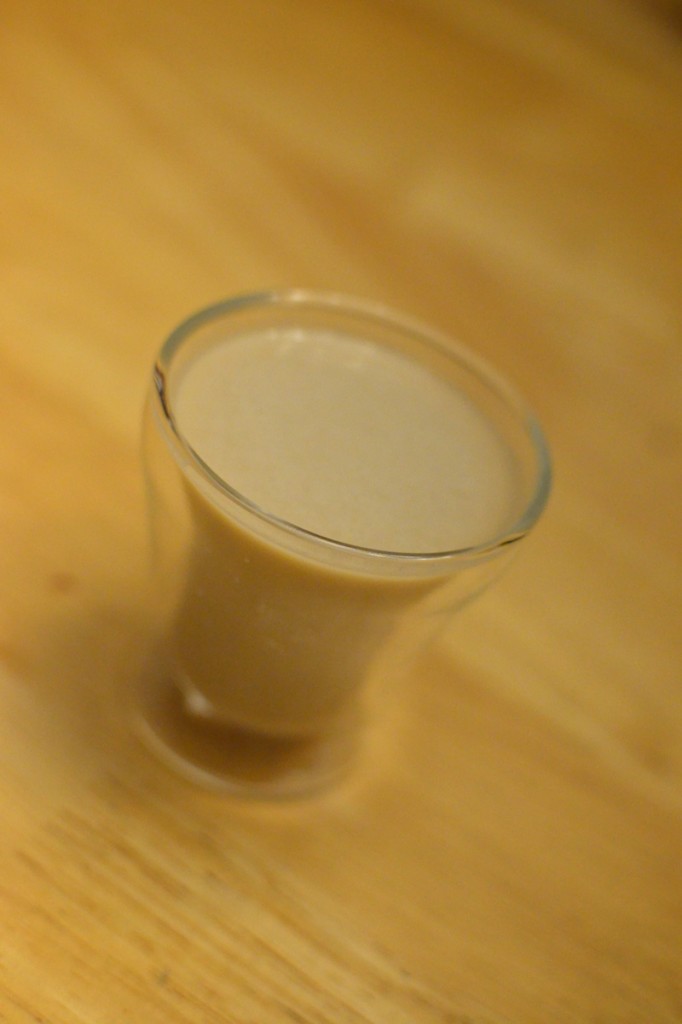 We ended the night with a viewing of the campy Soylent Green: The miracle food of high-energy plankton gathered from the oceans of the world! It doesn’t get more green than that.

Wanting to depart from a super carb and calorie heavy St. Patrick’s Day meal, I opted on the lighter side this year. Traditional Irish meals are meat, potatoes, and hearty breads. I decided to keep the potatoes, omit the bread, and focus on greens in everything. Our menu this year was a veganized colcannon, tofu Irish stew, and fresh pressed Leprechaun juice!

I’ve made colcannon in the past, which is a traditional Irish dish consisting of potatoes and cabbage.  I used the VegNews Colcannon recipe and omitted the leek, doubled the kale (as I didn’t have any cabbage), replaced the margarine with 1 tablespoon of coconut oil, and used almond milk instead of soymilk. It was fantastic! It was a nice blend of potatoes and greens or as Mr. Tuxedocat says, “It’s hard to go wrong with ‘taters and kale!”

Next on the menu was a peppery Unbeef Stew, also from VegNews. The protein base in this recipe was tofu with a mix of potatoes, onions, and carrots. I left out the margarine and added 1 1/3 cups of frozen peas to the dish to give it more color, nutrients, and green! This was quite tasty, although a reduction in the vegan worchestershire sauce may be in order to cut down the sweetness of the dish. I didn’t have time to cook this recipe overnight in a slow cooker, as the original recipe called for, so I just did it on the stovetop for approximately 1 hour.

In staying with the healthier theme of the menu, we avoided green beer, and went for true greens with my homemade Leprechaun juice! Using an Omega Juicer, I made a spicy, sweet, green beverage.

Cut the veggies and fruit into smaller pieces that can fit down the juicer shaft. Juice everything, making sure to juice the softer ingredients (like kale) first, followed by harder ingredients, such as carrots, to help it go down. Makes approximately 16 ounces of juice. Drink and enjoy!

*Keeping with my cheesy St. Patrick’s Day tradition, we watched Leprechaun 2 this weekend for good measure.

Overall, we’d rate this dinner 3 out of 5 carrots on the veganlicious scale!

Finding alternatives for a meat-free St. Patrick’s Day wasn’t difficult. I was never a corned beef fan in my pre-vegan days anyway, so finding a substitute for salty beef was not necessary. I decided to stick with mostly whole foods and forgo any faux meat products for this year’s feast. While listening to Flogging Molly in the background, I concocted our Irish feast.

We started off with some freshly baked whole wheat Irish Soda Bread (minus the raisins) from Happy Herbivore. The bread was dense, moist, and chewy. It was great with some vegan butter and dipped into our next soup course.

Next we had Irish Carrot Soup from this Epicurious recipe (minus the whipping cream). The soup was described by others as tasty and “carrot-y.” I found it a tad bitter for my taste, which could have been attributed to either the lemon juice or cloves included in the ingredient mix. I would make it again in the future if I omitted one or both of those ingredients.

The soup was followed by a nice green salad and our main course. I had previously made the kale salad numerous other times and blogged about it. I also have made the Chickpea Shepherd’s Pie before, but it came out even better this time because I used a different mixture of veggies from my first attempt. I used a mixed bag of frozen corn, peas, and carrots. I also added some nutritional yeast in the chickpea mixture as the original creator of the recipe recommended. Delish! The sour gherkins and castelvetrano olives were a nice salty side dish to the meal as well. Okay, so the olives were actually Sicilian (not Irish), but they were green and addicting.

Beverage wise, we were delighted by some spirits that our friend Brent brought over. The men enjoyed Guinness Extra Stout, which according to Barnivore, is the only vegan Guinness beverage. Normally Guinness is made with a fining process using isinglass (from the swimbladders of fish).

After dinner, we had a nightcap of a veganized Bailey’s Irish Cream (consisting of a coconut milk base) that was absolutely amazing. It was creamy, smooth, and sweet with just the right amount of Jameson.

Since it was a warm evening, I decided to make veganized Shamrock Shakes for dessert. I added a healthier version of Oreos to the mix for a cookies and cream appeal.

Put all of the ingredients (minus the mint and straws!) into a blender and puree until desired consistency is reached. Add more ice cream or milk depending on how thin or thick you want it. Garnish with mint and stick a straw in the glass for easier drinking.

This was the perfect blend of mint, vanilla, and cookie-goodness! The cilantro was a nice addition and wasn’t too strong or overbearing (for those who aren’t cilantro fans).

To top of our St. Patty’s Day vegan feast, we watched the campy, cult horror film Leprechaun, featuring a young Jennifer Aniston. It was hilarious and silly and the perfect ending for a great dinner with friends. It turns out that Jennifer Aniston’s character is vegetarian in the movie, thus prepping me up for another future edition of Vegetarian Protaganists in Horror Movies. Erin go Braugh!

Overall, I’d give this meal a 4 1/2 out of 5 carrots on the veganlicious scale!