Upon our visit to Niagara Falls on the Canadian side, I was becoming quite dismayed to find any good vegan options close to our hotel. After becoming frustrated in a slow internet search from our hotel room, I decided just to walk the local streets and see what I could find along the way. We happened to walk down a busy street with many restaurant options and stumbled upon this little Italian restaurant. They had someone with menus outside trying to drum up business. They also had a looping video playing showing how they make their homemade pasta dishes. I asked to look at a menu and then inquired if their pasta was made with eggs. I was told all their pasta was made with egg, however their gnocchi was not. Even the looping video mentioned this as well, as the person showing us the menus proudly pointed out. Score! I prefer gnocchi over pasta in restaurants most of the time anyway, so this was a pleasant surprise!

Walking into Four Brothers Restaurant & Tavern seemed like a step back in time into a grandmother’s house in Italy. Italian music was playing and there were curtains on the windows with quaint paintings on the walls. We were lucky enough to get privacy by being put in one side of the restaurant which was a room with windows looking out onto the street with its colorful passer-bys. 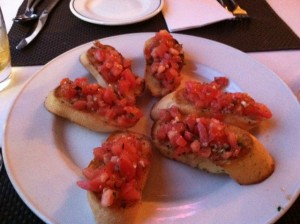 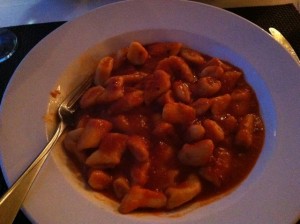 I ordered bruschetta, a glass of Canadian white wine (which I was told was like a Riesling), and gnocchi with tomato sauce. The white wine was not like the Rieslings I’ve grown to love in the Finger Lakes region of New York however. The bruschetta was very good and while not the best I ever had, the gnocchi held it’s own. You could tell it was homemade and it was very filling. The ambiance and service were impeccable to boot. I would return again if in the area.

I would give Four Brothers 3 1/2 out of 5 carrots on the veganlicious scale!