One of my favorite things about living where I do is the abundance of places where I can get vegan ice cream. I’m not kidding when I say that I have most of the local ice cream shops programmed into my phone, so I can call in a moment’s notice to ask what their vegan flavor(s) of the day are. Usually whichever place has some chocolate-based vegan ice cream gets my business. I find myself grabbing ice cream several times a week in the summer with the options I have in this area.

One place that regularly has vegan chocolate ice cream is the local favorite, Purity Ice Cream. They are known for their homemade hard ice cream. Just over a year ago (or more) they started carrying vegan ice cream (which they don’t make themselves unfortunately). They serve Chicago Soy Dairy’s Temptation vegan ice cream, which I’m a huge fan of. Purity typically has several flavors in stock regularly, such as chocolate chip cookie dough, mint chip, french vanilla, fair trade chocolate, and some new flavors like strawberry and coffee. Roughly 95% of the time, I end up getting my old standby, fair trade chocolate. Lately I’ve been addicted to their waffle cones and splurge (for the extra dollar) to partake in its goodness!

On this day, I wished I had gotten two scoops. It was so delicious! The ice cream is creamy, chocolate-y, and not too sweet. For those having a vegan birthday party, you can also get vegan ice cream cake in multiple sizes! 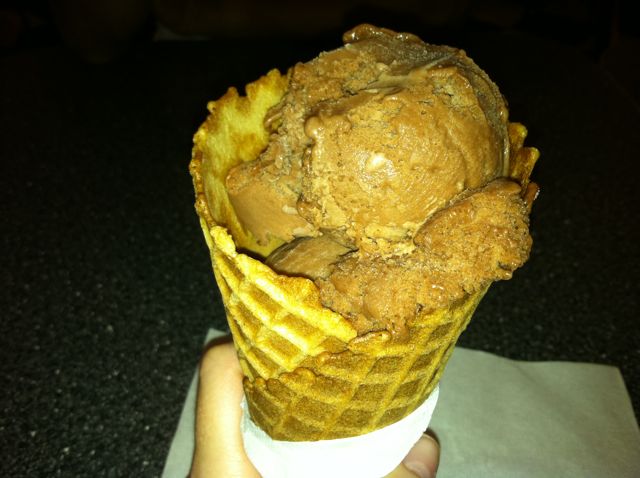 I give Purity’s vegan ice cream (Chicago Soy Dairy) a 5 out of 5 carrots on the veganlicious meter.